Radio ratings: what to watch out for 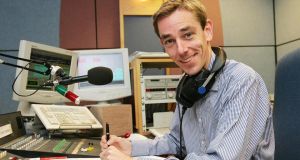 When it comes to the quarterly release of radio ratings, there have been a few dead certs in recent years: RTÉ Radio 1’s Morning Ireland will head the list of most listened-to programmes and RTÉ Radio 1 will dominate that list generally.

Today FM’s Ray D’Arcy, his colleague Ian Dempsey and 2fm’s Ryan Tubridy were the only non-Radio 1 presenters to have shows in the top 20 last time out (with Tubridy edging Today FM’s The Last Word with Matt Cooper into the 21st spot).

Local stations
Notwithstanding the recent desertion of weekend listeners from Radio 1 in general and Marian Finucane in particular, there is little to suggest that RTÉ’s grip of the most listened-to list will loosen all that much in the next batch of Joint National Listenership Research (JNLR) figures, due out later today (though Liveline has been closing in on Morning Ireland’s crown).

The chart of most popular shows doesn’t quite tell the full story of Irish radio, however. The commercial sector had a combined market share of 67.6 per cent last time out, with its position seemingly cemented by the fact a majority of 15-34-year-olds choose to listen to local rather than national stations.

The woes of 2fm, the Montrose cash cow turned loss-maker, are in large part connected to its weakness in Dublin. In the capital, the big success story in the past few years has been UTV’s FM 104, which has grown its market share to 14.5 per cent, making it second only to RTÉ Radio 1.

In such a crowded market, and with a fragmented picture nationally, the task facing new 2fm boss Dan Healy in bringing better fortunes to the station he calls a “sleeping giant” is tough indeed.