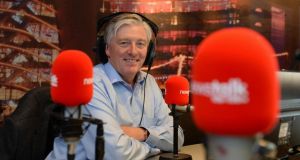 Pat Kenny: we’re only a little more than half way to finding out what the true listenership figures are for Newstalk’s ‘The Pat Kenny Show’ and its RTÉ Radio 1 rival ‘Today with Seán O’Rourke’. Photograph: Frank Miller

The Joint National Listenership Research survey might be a rather slow way to measure radio audiences, but it’s “the only game in town”, as Newstalk station editor Garrett Harte puts it.

The latest data, due to be published today, covers the 12 months up until the end of March, with the audience totals averaged out for that period.

This means we’re only a little more than half way to finding out what the true listenership figures are for Newstalk’s The Pat Kenny Show and its RTÉ Radio 1 rival Today with Seán O’Rourke.

The dramatic changes in the presenter line-up at 2fm are too recent to be captured by the data, as is the intensifying battle between Cork stations 96FM and RedFM.

But it is now a full year since Newstalk parted company with the Off the Ball presenting team now known as Second Captains, while at 2fm Dan Healy’s edict that no music recorded before 1990 be played has now been in effect for nine months.

Ipsos MRBI, which carries out the survey, recently began adding new questions that are designed to yield more information on the type of devices audiences are using to listen to radio. “This level of data will be additional to the usual audience estimates, and will serve to provide a better understanding of how people are interacting with the medium,” it says.