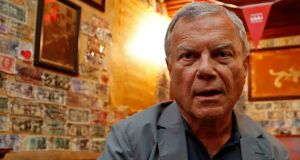 Sir Martin Sorrell talks during a session in a pub as part of the Cannes Lions International Festival of Creativity, in Cannes Photograph: Reuters

Martin Sorrell hit out at “leaks” from WPP in his first major public appearance since resigning as chief executive of the advertising group in April.

At an event on Thursday during the Cannes Lions advertising conference, Sir Martin, who has denied wrongdoing, complained about the “leak” preceding a Wall Street Journal report earlier this month that WPP had investigated whether he had used company funds for a prostitute.

“The most damaging thing that happened during the course of those events...was the leak over the Easter weekend at the very top of the company, and which to my knowledge there has been no investigation whatsoever,” he said, according to Reuters.

“There has been no investigation to my knowledge of how, why and what the leak consisted of and I think that is a fundamental flaw.”

The Financial Times subsequently published a detailed account of the events and allegations which preceded Sir Martin’s departure from WPP, which Sir Martin, 73, had turned into the world’s largest advertising group.

Sir Martin added that Mark Read and Andrew Scott, whom the company appointed to run the company on a temporary basis, should be named permanent joint chief executives.

“I’m not saying two individuals because nobody could replace me individually, but those two individuals have complementary skills,” he said, drawing laughter from the audience. “One on their own would not be sufficient in my view but two together can be a very powerful and potent combination.”

In response, WPP said the company “takes confidentiality very seriously” and is “acting appropriately” in terms of the leak. In terms of whether Sir Martin has been treated fairly, WPP said that the procedure for dealing with whistleblower allegations was “put in place when he was CEO”.

He added that the company is looking for a CEO, not joint CEOs, and that WPP is evaluating both internal and external candidates. – Copyright The Financial Times Limited 2018

1 Opioid executive admits to ‘no morals’ ahead of prison term
2 Who are Ireland’s 17 billionaires?
3 Farmer seeks to challenge €3.6bn Intel plan in High Court
4 South Dublin Credit Union members urged to borrow more to ensure survival
5 My father in a nursing home wants to gift me his house
6 Ryanair wants Irish courts to block Skyscanner from selling its flights
7 Fallon & Byrne founders McHugh and Byrne exit group
8 Fianna Fáil may have just pressed the pause button on the property market
9 Cathay Pacific to resume Dublin-Hong Kong flights in March
10 Davos 2020: Worlds of Trump and Thunberg collide on a Swiss mountainside
Real news has value SUBSCRIBE