‘Irish Times’ has daily readership of 388,000 according to JNRS 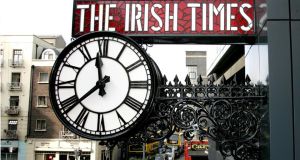 The Irish Times has the highest print reach in the daily market in Dublin among the ABC1 social group. Photograph: David Sleator

The Irish Times, IrishTimes.com and the title’s apps have a total average daily readership of 388,000, according to the latest industry figures.

The Joint National Readership Survey (JNRS) for the period from July 2013 to June 2014 shows that the print edition of the newspaper has a readership of 301,000, while 136,000 Irish adults consume Irish Times content online on an average day.

There is a crossover between these two groups, with some readers consuming content in both print and digital formats.

The survey, conducted by research company Millward Brown on behalf of members of the National Newspapers of Ireland, shows that almost 84 per cent of adults, or a little more than 3 million people, read some newspaper either in print or online.

The majority of titles have seen a decline in the readership of their print editions compared to the period from July 2012 to June 2013, with total readership levels being maintained by an increase in online readers across almost all titles.

The figures are based on the “average issue readership” of print newspapers and their websites and apps.

On this basis, some 565,000 people, or 15 per cent of the population, read or access a newspaper title online on an average day. This has increased year-on-year by 115,000 people, or 26 per cent. Excluding Sunday titles, the increase was 32 per cent.

The Irish Times has the highest print reach in the daily market in Dublin among the ABC1 social group, with 127,000 readers falling into this category.

It also has the highest combined print and online audience among Dublin ABC1s, reaching 159,000 such readers on an average day.

Some 80 per cent of its combined daily audience are ABC1s – a market seen as valuable by advertisers.

Meanwhile, the JNRS report shows that the Irish Independent has a combined print and online readership of 691,000.

The Sunday Business Post has 118,000 readers. Most consumption of Sunday newspapers still takes place via print, with more than two million reading each week in that format and only 153,000 people reading online.

The JNRS data is Ireland’s largest random probability survey, with a sample size of approximately 7,000 adults aged 15-plus. The study does not measure the readership of news sites that are not members of the NNI group, such as RTÉ.ie or TheJournal.ie.