Irish consumers ‘win seat at boardroom table’ but what about staff? 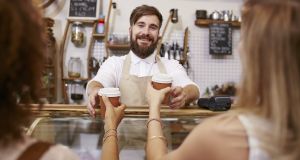 If a company wants to compete with its rivals on decent customer service, they must properly enable and motivate their employees to deliver it. Photograph: iStock

Early in his entrepreneurial journey, Amazon founder Jeff Bezos made a point of leaving an empty chair in his boardroom. The idea was to encourage his team to think about the “most important person”. This was not Bezos himself, as his underlings may have mistakenly thought, but the absent customer. The customer was always there in spirit.

The average Irish company executive would collapse in fits of laughing if their boss was to pull a Bezos. Even in the era of a kinder, caring Ryanair, one cannot imagine Michael O’Leary saving an empty chair in the airline’s boardroom to symbolise the customer, unless it was as some kind of joke.

A new report on the customer experience in Ireland, prepared by a customer service practitioners’ group called CXi, begins by positing that the Irish customer “has finally got a seat at the boardroom table”.

It highlights lots of nice touches from the companies that are highly ranked based on its surveys. The chief executive of Peter Mark, for example, is said to “read all customer complaints”, which is reassuring news for anyone who happens to suffer the no-doubt rare horror of a haircut that did not quite meet expectations.

Boots Ireland, meanwhile, apparently tells customers when their suggested improvements have been implemented – anyone for wider aisles? – while Tiger is praised for “proving the high street is very much alive and well”, which is certainly impressive work for a retail chain dubbed a “posh pound shop”.

But CXi also has some less complimentary things to say. Based on interviews with customer service managers at large Irish businesses, CXi says they see themselves as being involved in a customer service “arms race”, in which customers’ expectations are rising as fast – or faster – than their organisations’ ability (or will, perhaps) to improve customer service.

Unhappy staff rarely make for happy customers, even in the age of Amazon. If a company wants to compete with its rivals on the battleground of decent customer service, they must properly enable and motivate their employees to deliver it. If the people at the top of the company can’t make a financial commitment to customer service, the chances of it magically appearing all by itself are slim.