Mayo-based channel has funding shortfall of €8.7m after withdrawal of main backer 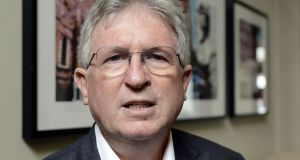 A television company in Co Mayo employing 30 people has obtained High Court protection after an unexpected funding shortfall and liabilities over assets of €8.7 million.

It was established in March 2011 with objectives including to promote Mayo as a centre of Irish and Celtic culture and to promote the Irish language.

It is a subsidiary of Eochair Media Holdings Ltd (EMHL) which, it was stated in court documents, has “encountered an unexpected and significant funding shortfall”.

Co-founder and chief executive, Piaras O’Reilly, and managing director, Mairead O’Reilly, together own 51 per cent of EMHL while former London minicab mogul John Griffin has the other major shareholding of 41 per cent.

Mr Griffin resigned as a director of both EMHL and Telifis Maigh Eo on October 27th.

In its petition seeking court protection, Irish TV said it has been left with an immediate operational cashflow shortfall after the main funder withdrew support in late October. That followed four years of losses and it now has net liabilities of €8.7 million, it said.

Other reasons for its difficulties included the fact it was not in a position to fund RTÉ’s security requirements for accessing the Saorview platform. The Brexit decision has affected advertising revenue, it added.

An independent expert’s report found the deficiency between assets and liabilities has been satisfactorily accounted for and is due to the accumulated losses of the last four years, it said.

That report also expresses the view, if a number of steps are taken, it has a reasonable prospect of survival. These include thre closure of offices in New York, London, Dublin, Tyrone and Kerry, implementation of a redundancy programme for certain employees, and reduced travel costs and expenses across all departments.