Image problems: Ireland at the heart of football tax probes 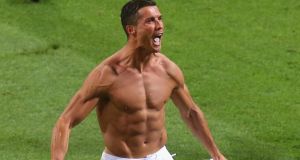 During the Champions League final, expect Cristiano Ronaldo to rip off his jersey at some point to flex his muscles. Photograph: Alexander Hassenstein/UEFA via Getty Images

During the Champions League final tonight, expect Cristiano Ronaldo to rip off his jersey at some point to flex his muscles. It’s the same drill: the ball goes in the net, the Real Madrid star goes topless and his sponsors go weak at the knees.

It is all part of the preening Portuguese’s carefully-honed image as the personification of power, speed and success. This image drives his wealth, as businesses pay to have their products associated with his name and face.

Ronaldo’s vast earnings from his image rights, however, are also currently the subject of an investigation by Spanish tax authorities that led directly to an office in Dublin’s north inner city.

His image rights have for years been handled by two Irish companies, Multisports Image and Management (MIM) and Polaris Sports. Both are registered to the office of the tax firm Moore Stephens accountants.

Tax officials could seek up to €15 million from Ronaldo in back taxes on €75 million of payments that moved through Ireland between 2011 and 2014. Officials have until the end of this month to decide whether to prosecute.

Ronaldo has strenuously denied wrongdoing. He is also far from the only football star to have his collar felt by European tax authorities over image rights.

As revealed by Football Leaks, the website that obtained more than 18 million hacked documents on the sport’s finances, there is often an Irish connection.

Jose Mourinho, the Manchester United manager and former Real Madrid boss, had his financial affairs investigated in Spain, including links to MIM and Polaris. Authorities recently also discussed a prosecution for Real Madrid left-back Fabio Coentrao over €1.4 million of payments through Dublin.

Monaco player Radamel Falcao, a God to Colombian football fans, has also been investigated for his use of Irish companies in tax-efficient image rights structures. He could face a €5.5 million bill.

There has been scrutiny, too, of Ricardo Carvalho, whom Mourinho brought to Chelsea, and Angel Di Maria, whom he brought to Madrid. Di Maria’s home was reportedly searched last month by French officials probing image rights: the Agentinian now plays for Paris St Germain.

Paul Pogba’s image rights even resided for a time in Clonakilty, west Cork. The French man, who is not being probed by tax authorities, is unlikely to have developed a taste for black pudding.

So why do they all use Ireland?

A top UK-based sports lawyer explains that the biggest stars can earn more from image rights than from their club salaries.

“Wages are taxed at source in the countries in which they play, reducing the scope for tax savings,” he said.

Earnings from image rights, however, can be more easily diverted abroad by assigning the rights to a foreign company, which collects the cash from sponsors.

Many footballers assign their rights to tax havens: Ronaldo’s were owned by Tollin in the British Virgin Islands, while Mourinho’s went to another BVI outfit, Koper. Coentrao’s resided in Panama.

But many corporate sponsors are uneasy sending large payments to tax havens. It’s not a good corporate governance look. They need an acceptable intermediary, which is where Ireland comes in.

“The structures footballers use are not that different to the double-Irish tax structure in the corporate world,” said an unnamed financial adviser to sports stars.

The tax haven entity will often license rights to a company in a developed, reputable jurisdiction such as Ireland. This entity bills the sponsor and takes a commission before sending the cash on to the haven.

“Ireland is just used as a conduit to transfer money on to the havens,” said the financial adviser. “It is a very aggressive tactic. Most of the cash goes to the Caribbean, and you only have to pay 12.5 per cent on the small amount you leave in Ireland.”

Financial practice, BDO, in Dublin advises many top sports stars but it does not construct the aggressive image rights structures used by some football stars.

Ciaran Medlar, a BDO partner and its head of tax services, said the complexity and cost of maintaining the structures unearthed by Football Leaks means they are “not widely used or suitable”. And while foreign media often cite Ireland’s 12.5 per cent rate as central to why this country is chosen, he thinks it is incidental.

“Only a small proportion of the profits are retained in Ireland, so the tax rate will not be the major reason,” he said.

Rather, he suggested, the use of Irish companies within such group structures could “assist in achieving a lower global tax rate and reduced withholding taxes”.

The sports lawyer said the practice is especially popular in Spain and Portugal, where tax-haven companies are often blacklisted. Instead, many footballers first look for a friendly European staging post.

“You could use Malta or Madeira. But Dublin is more familiar and the business environment is very professional.”

The practice of routing image rights payments through Ireland isn’t inherently illegal in any European state, however.

Tax authorities only become interested for two reasons: they may suspect clubs are paying inflated image rights payments in lieu of taxable wages, or they suspect some of the image rights cash was improperly declared abroad.

Spanish authorities really began to clamp down on image rights in 2015. If the Irish intermediary had no staff to carry out the purported work, for example, that was considered a major red flag.

“These aggressive structures are on the last lap,” agreed the unnamed adviser.”

Who are the go-to firms in Ireland?

Many of the footballers whose use of Ireland as a conduit to send cash to tax havens was revealed by Football Leaks are clients of Portuguese superagent Jorge Mendes. His Gestifute agency already has strong links to Ireland via Dublin-registered Gestifute International.

The Irish company, which last year paid dividends of €12 million to Mendes, was set up for him more than 12 years ago by a specialist international tax firm from Cork, HLB Nathans. This firm is now called Moore Stephens, and Mendes’s company is registered at its Dublin office.

Gestifute International’s directors are Andy Quinn, the managing partner of Moore Stephens, and Luis Correia, Mendes’s nephew and a 5 per cent shareholder. Dublin consultant Liam Grainger, who works closely with Moore Stephens using a firm called Procorp Consultants, resigned as a director a month ago.

If Moore Stephens could set up efficient Irish structures for the benefit of Mendes, it could also do it for his clients.

Grainger and Quinn pop up frequently in the Gestifute-linked image rights architecture maintained by Moore Stephens. Quinn is director and sole shareholder of MIM, the main intermediary used by Mendes’s clients. It was set up at around the same time as Gestifute International.

Bob Richmond, a Kildare financial adviser, was also a director until his death last year. Grainger stepped down from the MIM board in 2012, but still files documents via his involvement with Gransec, its company secretary.

Its accounts don’t reveal how much money it has bounced to the Caribbean, but it had €5.5 million in cash at the end of 2015. Football Leaks says it usually took commissions of 4-6.5 per cent. Its 2015 accounts are the first to mention any staff, with two employees noted.

Quinn is also a director of Polaris, which Football Leaks said was more active on advertising deals than MIM and took commissions of up to 20 per cent. Polaris is mostly owned by companies linked to Mendes, while Correia, who also sits on the board, owns a third. Ronaldo’s Tollin previously owned a stake.

Polaris, also registered to the Moore Stephens Dublin office, lists eight staff with average salaries of €67,000. Moore Stephens takes a fee of about €50,000.

One-time Barcelona star Deco is a former Mendes client who now has his own relationship with Moore Stephens. Quinn sits with Deco, also known as Anderson Luis de Souza, on the board of D20 Sports Management, a Dublin image-rights firm linked to Deco’s fledgling D20 agency.

Pogba, meanwhile, is not a client of Mendes. Rather, he is linked to Mino Raiola, the pizza-chomping superagent who is Mendes’s main rival in the game. Three years ago, when Pogba was at Juventus, Raiola had a dispute with Pogba’s previous agent over image rights. Raiola tried unsuccessfully to register Pogba’s European rights to Blue Brands in Dublin.

In March 2016, after the dispute was settled ahead of Pogba’s move to Manchester United, the rights were reassigned to Blue Brands, established by Dublin-based global trust company specialist Pearse Trust.

Pogba’s rights have since been assigned to a Jersey company. But in recent months, Raiola’s cousin, Vincenzo Raiola, joined the Blue Brands board, suggesting the Irish company is still an important cog.

Pearse recently assigned administration of Blue Brands to accountants O’Mahony Donnelly (OMD), who are based in Clonakilty. So Pogba’s link to the town definitely has nothing to do with pudding.

OMD made no response to a request for comment. Moore Stephens declined to discuss clients and said it works to the “highest professional standard”. MIM said its reputation is based on compliance with “tax, legal and regulatory requirements”. Grainger didn’t respond.

As Juventus fans may find out in Cardiff tonight, he usually prefers to do his talking on the football pitch.