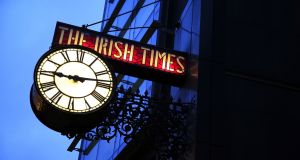 The Irish Times has won distinctions in two categories at the Global Media Awards in New York. Photograph Nick Bradshaw

The Irish Times has won distinctions in two categories at the Global Media Awards in New York, including a gold medal for a recent native advertising campaign by the publisher.

The awards, organised by the International News Media Association, attracted over 650 entries from almost 200 media organisations in 36 countries across multiple platforms including television, radio, print and digital.

At a ceremony in Manhattan on Tuesday, The Irish Times won gold for Best Execution of Native Advertising for its Audi “Best of Both worlds” campaign, developed in collaboration with Mediacom Ireland.

The Irish Times also won bronze in the Best Marketing Solution category for the VHI “Let’s talk about fertility” campaign in collaboration with PHD.

The competition was judged by an expert panel of 44 media executives from 17 countries.

has already won several domestic awards, including distinctions for Best Sales Initiative at The Media Awards 2017 and in the category of Best Native Content at the Digital Media Awards 2017.

In the 14 months since its launch last year, The Irish Times Content Studio has created over 60 individualised brand stories which have generated in excess of 1.54 million page views so far.

Managing director Liam Kavanagh said: “We are delighted with the international recognition from our global peers, not just for The Irish Times, but also for our valued partners PHD, Mediacom, VHI and Audi, who trusted us to deliver their campaigns in a best-in-class manner.

“Content Studio has been built with the customer in mind to produce content that is trusted, appropriate and engaging, with values that are consistent with the ethos and core purpose of The Irish Times,” he said.