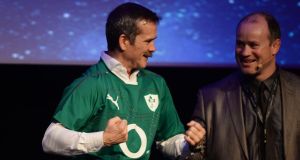 Astronaut Chris Hadfield and Frankie Sheahan at the Pendulum Summit in Dublin in 2014. Photograph: Alan Betson

Pendulum has announced that it will host an event in the city in September, targeting more than 1,000 attendees. The New York event will be held under the moniker “Elevate to Excellence”.

The precise venue and line-up of speakers has yet to be unveiled by Mr Sheahan, who retired as a professional rugby player nine years ago and has 29 rugby caps for Ireland.

However, the putative website for the New York event appears to suggest that among its main speakers will be Jack Canfield, a motivational speaker who co-wrote the Chicken Soup for the Soul series.

“We invite all our Pendulum network to share this announcement with anyone they know stateside who would relish this unique opportunity,” said Mr Sheahan.

Tickets for the New York event have yet to go on sale, and their pricing has not yet been revealed. Tickets for Pendulum’s two-day Dublin event in January, however, were priced at up to €1,100.

Mr Sheahan founded Pendulum Summit in 2014 as a one-day event in Dublin, with Canadian astronaut Chris Hadfield as keynote speaker. It has since expanded to become a two-day affair with more than 4,000 attendees.

The most recent Pendulum event was held in January, when Richard Branson was the main speaker. Other speakers included perfumes entrepreneur, Jo Malone, and Michelle Mone, the working-class Glaswegian founder of the Ultimo bra company who has been elevated to British aristocracy as a baroness.

His former team mate, Mr Sheahan, also has his own motivational story to tell. He was adjudged bankrupt last year over legacy property debts of €1 million. Yet he has continued to grow the event, which he co-founded with his wife Norma Sheahan.