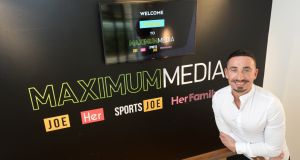 An investor has been found for the digital media company behind Joe.ie, the High Court has heard. But the plan must first be approved by the Competition and Consumer Protection Commission and the appropriate minister before it can be approved by the court.

Greencastle Capital bought Joe Media’s UK business earlier this month, acquiring the assets out of administration. It said at the time that the plan was to merge the Irish and British businesses into a single company based in Dublin, with new media and technology business Iconic Labs managing the operation.

The deal before the Irish court includes a €300,000 investment in a shares subscription in Maximum Media Network, the assumption of the company’s secured liability through a loan agreement with the secured creditor and the availability of up to €2million in working capital facilities.

The UK subsidiary is subject to a separate insolvency procedure in England and Wales.

Ross Gorman, for the examiner, said ministerial approval will be required because the investment involves a media company. Mr Justice Quinn adjourned the matter to September 7th to allow the Competition and Consumer Protection Commission and the Minister consider the proposal.

The judge had appointed Shane MCarthy of KPMG as interim examiner to MMN, which was incorporated as “Joe Dotie Ltd” but became MMN in February 2013. It employs 48 people and ran into significant solvency/financial issues.

The appointment of the examiner was sought by BPC Lending Ireland, of Molesworth Street, Dublin 2, which was owed more than €6 million by of MMN, which has its registered offices at Distillery Building, Fumbally Lane, Dublin 8

The court heard the BPC Lending debt represents some two-thirds of the company’s entire debt.

Neither Revenue, owed €460,000, and the landlord, BCP Fund Management (which is not connected with BPC Lending) which says it is owed €187,000 in rent arrears, opposed the examinership as long as they continue to receive money owed to them on an ongoing basis during the term of the examinership.

The court heard a factor in the downturn in MMN’s fortunes was a controversy last year when it was revealed a company employee used a “click farm” to artificially inflate engagement numbers. Click farms involve a large group of low-paid workers being hired to click on paid advertising links.

The company said it had only become loss-making in 2018 and had enjoyed some 42 million “hits” a year on its platforms.