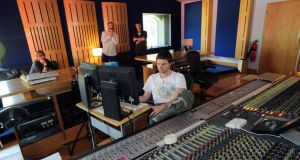 As Paddy Kelly digs in on sun-soaked Malta, his son’s former business partner is still battling away back home.

The entertainment entrepreneur Paddy Dunning, an old friend of Simon Kelly, is having an open day tomorrow at his Grouse Lodge recording studios in Westmeath to drum up some business.

Dunning, who also owns the Temple Bar Music Centre and the National Wax Museum, is an ebullient sort of chap.

He was on his way to Knock, he told me yesterday, with his mother “and four priests and nuns” when he pulled over to talk.

“It’s been tough, very tough, in the music industry,” said Dunning. Has it?

Accounts filed last month for Grouse Lodge show that in 2012, its profit and loss account swung from a deficit of more than €1.1 million to a surplus of almost €240,000. Its parent company, Temple Lane Studios, is also €1 million in the black.

Grouse Lodge, which has been used by Paolo Nuttini, Simple Minds and Michael Jackson, has been selected by Fas to run the first course on Festival Management.

Rock band Duman – the “U2 of Turkey”, according to Dunning – also recently used the studios to record a song used as an anthem at the recent Gezi Park political protests in Turkey.

Back in Dublin, Dunning’s wax museum is ticking over, “but people don’t want to visit a wax museum when the weather is hot”.

He still expects 160,000 visitors this year, and a new model of US president Barack Obama is apparently in the pipeline.

We are still waiting on Dunning to put the Popemobile used to ferry John Paul II back on the road, as promised. “It’s coming,” he said.

So is Judgment Day, Paddy.