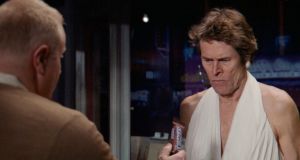 Actor Willem Dafoe in a scene from a Snickers Super Bowl 50 spot. Super Bowl 50, between the Denver Broncos and the Carolina Panthers, will be played Sunday 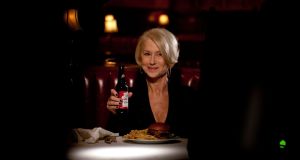 Helen Mirren delivers a lecture about drunk driving and why it’s a terrible idea, in a scene from a Budweiser spot for Super Bowl 50.

From Willem Dafoe in drag to an unlikely Helen Mirren necking a Budwesier, this year’s edition of the Super Bowl - the biggest day in US sports - is proving something of a feeding frenzy for advertisers.

More than 40 big name brands have paid extravagant sums to advertise during Sunday’s clash between the Denver Broncos and the Carolina Panthers.

The official broadcaster CBS is said to be charging advertisers as much as $5 million for 30-second spots during the ad breaks.

The average cost of a 30-second Super Bowl ad has jumped 50 per cent in the last decade when adjusted for inflation, according to data provided by WPP’s Kantar Media.

Last year’s final in which the New England Patriots defeated the Seattle Seahawks was the most watched single television program ever in the US, seen by a record 114.4 million viewers.

The season finale has generated $5.9 billion in inflation-adjusted ad spending since 1967.

Super Bowl Sunday is the second-largest day for consumption of food and drink for Americans, behind Thanksgiving Day.

Dips and spreads are the top choice of food to eat during the Super Bowl, followed by chicken wings, popcorn and pizza. Americans will consume an estimated 325.5 million gallons of beer on the day.

1 Google tells workers to return to country where they are employed
2 Pension problems: Workers ‘leaving free money on the table’
3 Recurring Covid restrictions will kill off many viable businesses
4 Brussels drafts rules to force Big Tech to share data
5 Prof Matt Cooper: ‘it’s not about the money; it’s about the patients’
6 Subway bread too sweet for the Irish tax authorities
7 Invest in more social housing to avoid Covid-related supply shock, says ESRI
8 Sean Quinn stunned at rebranding of Quinn Industrial Holdings
9 Institutional investors are playing a key role in providing housing for all
10 IAIM saw lobbying as key to CEO role taken by D'Arcy
Real news has value SUBSCRIBE