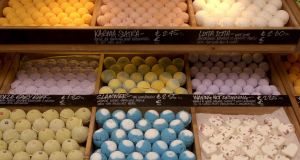 Credit unions, cosmetics retailer Lush and An Post are the strongest organisations and companies for “customer experience” in Ireland, according to a survey published by Customer Experience Insights (CXi).

Lush, famous for scented “bath bombs” detectable to the nostrils of passers-by, was a new entry in second place, while An Post climbed five places since last year’s survey to take third.

Pharmacy chain Boots, Aldi, Marks & Spencer and Penneys also featured in the top 10, with M&S appearing twice – once in ninth place for its general retail operation, and once in joint 10th for its Simply Food outlets.

In its report, CXi said Ireland’s 339 credit unions had forged “the most powerful bond with their customers, built completely on trust”, while the products they offered were “designed to meet real customer needs, rather than being based on the idea of backroom executives”.

CXi also said An Post’s customers felt “cared for and understood”, which is good news, perhaps, for the organisation’s new chief executive, David McRedmond, while Penneys was praised for a “no quibble” returns policy and Aldi for non-grocery products that “consistently delight”.

Irish Water managed to fall 12 places to 149th and was the lowest ranked of all utility companies, while Dublin tram operator Luas, a former high flier, plummeted 105 places to 127th. The survey was carried out in June soon after the company’s drivers went on strike over pay and conditions.

An Garda Siochána just made it into the top 100 in 97th position, having been judged to deliver a better customer experience than the likes of Starbucks and Burger King, which shared 100th place. The Passport Office was the highest-ranked public sector body in 32nd.

Ryanair, which has adopted a radical new policy of being “nice” to customers in recent years, climbed 24 places to 77th, though rival Aer Lingus still ranks ahead of it, in 28th spot.

The survey, conducted by Amárach Research, asked a representative cross-section of consumers to select from 170 brands across 10 sectors. More than 42,000 customer experiences were then evaluated on how good they were at things like minimising hassle, meeting expectations, resolving difficulties and understanding what it is their customers want.

The insurance sector was the worst performing of the 10 sectors, which CXi attributed to massive hikes in car premiums and overly complex products. All 10 car insurance companies surveyed failed to make the top 100.