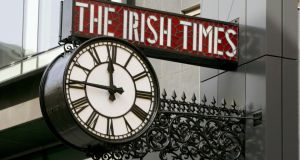 Some 80 per cent of the readership of ‘The Irish Times’ belongs to the ABC1 social group that advertisers deem an attractive target. Photograph: David Sleator

The average daily readership of The Irish Times and irishtimes.com is 410,000, up 6 per cent year-on-year, according to the latest industry snapshot.

The Joint National Readership Survey (JNRS) for 2014 suggests the print newspaper has a readership of 316,000, while the website is used by 140,000 Irish adults on an average day.

The survey, which is conducted by research company Millward Brown on behalf of member titles of the National Newspapers of Ireland, shows that 82 per cent of adults, or almost 3 million people, read some newspaper either in print or online.

Total online readership for NNI titles increased 27 per cent last year, the survey of almost 7,000 adults by Millward Brown found. People who belong to the AB social group, who are less than 45 years old and who live in urban areas, are more likely to read online.

Dara McMahon, co-ordinating director of the NNI, described total print and digital readership of the titles as “very strong” and said the online audience was expected to grow further, offsetting declines in print readership.

“High cross-over between the platforms continues, with seven out of 10 online readers also reading newspapers in print,” she said.

The survey, which is compiled for the benefit of advertisers, points to growth in the digital readership of Sunday titles, a market where print is still the dominant format.

On this basis, the survey found that The Irish Times and the Irish Independent increased their total audience year-on-year. They were the only daily titles to do so.

Some 80 per cent of the readership of The Irish Times belongs to the ABC1 social group that advertisers deem an attractive target.

The JNRS report shows that the Irish Independent has a combined print and online readership of 676,000. The Irish Examiner’s readership is 222,000, while the Irish Daily Mail’s tally is 215,000.

The Sunday Independent has a combined readership of 968,000 and is the most-read title in the market, echoing its position as the biggest-selling print newspaper. The Sunday World is calculated to have 711,000 readers, while the readership of the Sunday Times is 383,000.

The Sunday Business Post is read by 114,000 people, the survey suggests, while weekly title the Irish Farmers’ Journal increased its readership year- on-year to 283,000.

The JNRS study does not measure the readership of news sites that are not members of the NNI group, such as RTÉ.ie and TheJournal.ie.