Businesswoman will focus on her wellness start-up, Thrive Global 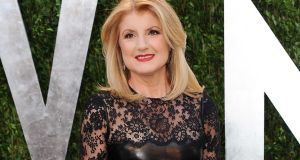 Arianna Huffington, who founded the Huffington Post in 2005: “There is only one way to do it – with your full attention and all your heart,” she said. Photograph: AP

Arianna Huffington said she plans to step down as editor-in-chief of the Huffington Post, the politics and news site she founded in 2005, turning her attention to a newer health and wellness venture.

Ms Huffington (66) announced her departure in a memo to staff of the publication, which was acquired by AOL for $315 million (€282 million) in 2011 and is now part of Verizon Communications’s media business. She said she had intended to keep running the Huffington Post but decided to turn her attention to her startup, Thrive Global, after attracting investors and hiring staff.

“There is only one way to do it – with your full attention and all your heart,” Ms Huffington said.

“This is also the only way I have ever known how to run HuffPost through the years, as we have evolved and grown, taking the risks that have led us where we are today.”

Verizon had given Ms Huffington permission to pursue the new venture while staying with the company, where she serves as president and editor-in-chief of the Huffington Post, sources said. – (Bloomberg)