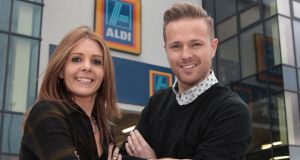 Supermarket chain Aldi is to sponsor 2fm’s The Nicky Byrne Show with Jenny Greene in a 14-month agreement understood to be worth about €300,000.

The launch of the 11am-2pm show last March was one of the big changes to the 2fm schedule shake-up earlier this year, with Greene and former Westlife singer Byrne replacing Colm Hayes, who moved to a drivetime slot, and Larry Gogan, who moved to weekends. The show was recently named newcomer of the year at the PPI radio industry awards.

The sponsorship, which will include nine stings per day and 18 cross-station promos per week, begins on December 1st.

Aldi group buying director Rob Farrell said Aldi Ireland was “confident that this sponsorship will allow us to engage with our customer base”.

It is not the only supermarket to sign deals with 2fm, with Byrne and Greene’s show following on from Ryan Tubridy’s programme, which recently attracted SuperValu as a sponsor.

The latest Joint National Listenership Research survey suggests the two shows are the best-performing slots on the revamped 2fm, with the Berocca-sponsored Breakfast Republic losing listeners since its debut.

Head of 2fm and RTÉ director of radio sales Dan Healy described the Aldi sponsorship as a “significant” boost to the station, which was once a commercial cash cow for RTÉ but has plunged into the red in recent times.

Healy expects 2fm will make “a small loss” in 2014 but become “a net contributor” to RTÉ by this time next year.