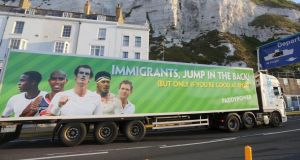 Paddy Power was censured last autumn for the lorry advertisement that read “Immigrants, jump in the back! But only if you’re good at sport”

It’s a hard life being an advertiser. There you are trying to shift chocolate or insurance or dishwasher tablets and everyone else is trying to make you uphold societal standards that in real life hover between wavering and nonexistent.

Don’t swear. Don’t make laughably outlandish claims designed to make you look better than you really are. Don’t think for a moment that alcohol makes you more attractive. Don’t frighten children at bus stops with pictures of monsters’ faces painted in blood. That kind of thing. It’s hard.

The non-statutory, industry-funded Advertising Standards Authority of Ireland, which brought revisions to its code of standards into effect this week, treads a fine line. It “has no mandate to act as a censor of public morals”, as the code says, but it does try to tackle areas of “societal concern” such as gambling, e-cigarettes and food marketing.

Gambling ads should not, for instance, imply that a flutter can provide an escape from personal problems such as loneliness or depression. Ah. Nor are they meant to exaggerate the chances of winning. Right. The problem is, any half- decent ad for the Lotto will have your eyes glazed over with thoughts of how you’re going to spend the jackpot.

The good news for advertisers is that there’s no cure for being suggestive. The other good news is that the main sanction for being in breach of the ASAI code is an order to withdraw the offending ad, which may have run its course by that point anyway. The bad news for purveyors of the “sorry if we caused offence” excuse is that it is not the intention of the advertiser that is examined by the ASAI’s complaints committee, but the ad itself.

A brand such as Paddy Power, censured last autumn for the lorry advertisement that read “Immigrants, jump in the back! But only if you’re good at sport” would likely argue that it’s not the job of advertisers to help us pretend that everything is okay with the world.

That ad was a characteristically sharp intake of poor taste, and would leave anyone with an ounce of empathy feeling queasy, even if they also picked up the aftertaste of A Point Being Made.

It was still interesting that the complaints against it were upheld by the ASAI on the grounds that it was “inappropriate for advertisers to refer to vulnerable groups in a manner that highlighted their current high-profile difficulties . . . merely to attract attention”.

That conclusion sounds like the ASAI committee had Paddy Power’s number. But the bookmaker is surely not the only advertiser to “refer to vulnerable groups” to attract attention.

It all hangs on that word “merely”. If a company attaches its brand to human tragedy, it can expect people to be upset. If it also makes a corporate donation to charity at the same time, then it can sit back and wait for the praise to roll in.

One of the reasons the deliberately offensive, contrarian, shock-merchant brands can make such hay is they manifest as refreshing in a sea of companies that seem to be demanding our admiration the whole time.

Lidl’s current Ladies’ GAA line “Serious athletes deserve serious support”, for example, is a wonderfully succinct expression of self-congratulation. Its ads seem less a promotion of the sport than the fact it has been amazing and forward- thinking enough to throw its money in this direction.

Still, we’re never happy, right? We give out when advertisers are dispiritingly conservative in how they present the world. Then, when they acknowledge social progress in the ads they create, we turn around and say: “No, you’re not allowed incorporate our ideals and beliefs for your capitalist ends, you utter asterisks”.

Naturally, weddings being events that banks think it’s absolutely great to pay for with personal loans, the financial sector is only warming up to its new, referendum- endorsed market. These lenders are behind the curve, but there’s no kicking them off the track now. And there would be something wrong if they were to ignore this joyous new and available target demographic: marriage is an institution that has long had the support of banks.

So where does that leave us? It leaves us sitting at a bus stop, looking at an ad for the film Sinister 2 comprising a monstrous face, dripping blood and child handprints in a suspicious shade of red.

It leaves us with two conflicting thoughts: “My children are screaming. I must get onto the advertising standards people about this” – eight complaints, upheld. And: “Oh, there’s a new horror movie out. I suppose it can’t be any scarier than the real world.”

1 Corona beer firm reeling after 8% slide due to coronavirus
2 Life as a Facebook moderator: ‘People are awful. This is what my job has taught me’
3 Pharma giant AbbVie warned Government against ‘unfair’ €572m tax bill
4 Coronavirus-induced sell-off wipes €6.7bn off value of shares in Dublin
5 AIB to sell more than 500 ATMs to Brink’s
6 Tyrone offsite building firm attracts multimillion investment
7 What does it take to get banned from social media? More than you’d think
8 Coronavirus: ‘All bets are off’, says aircraft industry chief
9 Bank leaked my loan request to family who tried to rip me off
10 How well paid do you think you are? Here’s how to work it out
Real news has value SUBSCRIBE