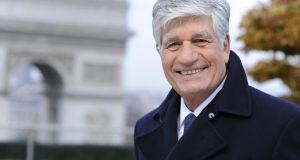 Maurice Lévy: has been called the Napoleon of advertising for the string of acquisitions – not always friendly – which grew the once small Publicis agency into a giant.

If judged only by numbers, Maurice Lévy would be an impressive figure. He has transformed Publicis, the French firm he joined in 1971, into the world’s third-largest advertising and media conglomerate, with market capitalisation of €13.3 billion.

None of which begins to convey the incredible charm of Maurice Lévy, the self-deprecating humour, the suave ease with which he conquers all and sundry.

“I am extremely, extremely sorry for my poor English,” he tells the Anglo-American Press Association when he invites us for breakfast. “I hope you will forgive me and understand my broken French accent.”

Lévy was born in Oujda, Morocco, in February 1942, one of eight children of a left-wing Spanish Jewish couple who had fled Franco’s Spain, then Nazi-occupied France. He later won a scholarship to study computer science at New Jersey City University. It’s an unusual background for a member of the French elite.

Lévy has agreed with Publicis’s board that he will retire once the 2016 accounts are signed off at the general assembly in May 2017. I asked him what he has learned from his long career. He begins with an anecdote.

“When I was 29, the chairman of the company I worked for invited me to lunch. I thought he was going to give me a raise. He said, ‘The board met and we decided to make you the CEO.’ I said, ‘Why me?’ He said, ‘Because the board considered you the best.’ I had this stupid reaction which was to say, ‘If I’m the best at 29, I have to change agencies, because I will not learn anymore.’ And I left. I resigned on the spot.”

Lévy was put in charge of IT at Publicis, where he created magnetic tape back-ups of all the company’s data. When a fire ravaged the agency’s headquarters, it was able to resume work within a week, thanks to Lévy’s foresight. Publicis’s founder, Marcel Beustein-Blanchet, chose him as protégé and successor.

“Today, what I have to learn is much bigger than what I have learned until now,” Lévy says. “It is really important to me to continuously learn; from people, from social trends, from the economy. I am passionate about learning.”

Publicis’s seventh-floor dining room looks out over a garden terrace and an unparalleled view of the Arc de Triomphe, a symbol of the company nearly as recognisable as its sun with a lion’s face logo. Lévy has been called the Napoleon of advertising for the string of acquisitions – not always friendly – which grew the small agency into a giant.

When John Wren, the chief executive of Omnicom, met Lévy in this very room in February 2013 to discuss the $35 billion merger that would have created the world’s largest advertising agency, Wren pronounced the view “gorgeous!” “All this could be yours!” Lévy replied. Six months later, they announced their would-be merger at a photo-opp overlooking the Arc de Triomphe.

In May 2014, the merger was called off. “We got divorced before we married!” Lévy announced. He had wanted a “marriage of equals” but complained that Omnicom demanded key posts, including chief executive, financial and legal director, for Americans based in New York.

“With Sapient, we have the big numbers differently,” Lévy says. “We have a much stronger position in digital and technology, from which more than 50 per cent of our business is derived… Technology is core to our business, and we will not be able to develop new tools if we don’t have access to technology inside the company. We made the assumption that our clients face the same situation.”

Lévy describes Publicis’s mission in terms of “dreams” and “alchemy”. He says “empowered consumers” are transforming business worldwide. “It’s no longer like Mad Men; you don’t have to wait for feedback. They are very quick to make themselves heard. It’s a permanent conversation with consumers. They can move very quickly from conversation to transaction.”

The collection of consumer data has revolutionised advertising, but poses ethnical questions.

“The fact that we have access to consumer profiles means we can target them much better,” Lévy says. “It lowers the cost of the media and, at the same time, it’s less intrusive, which is appreciated by consumers… We need to be selective, which is why this will be the realm of mathematicians and algorithms for the next three to five years.”

In France, the law on information and liberty creates a particular challenge. “We have to invent processes and systems that do not identify people. It’s extremely complicated. How can I address the right message to the right person without knowing their identity or anything about their private life?

“We do it through a kind of avatar. We create a clone of a profile.”

Word-of-mouth recommendations of brands and products is a fast-growing trend, Lévy says. “For example, if you write on Facebook that you looked at Chanel for a jacket, but found a similar one at Zara for 5 per cent of the cost, people will say ‘okay’ and go to Zara.”

The Chinese internet portal Tencent and the Chinese WeChat app are world leaders in another trend, Lévy says. “They’ve created a link which is much stronger than what we have on Facebook between social media and commerce. When you’re interested, they offer you the possibility to buy immediately. It’s very clever.”

Lévy uses Amazon as an example of the convergence which is also transforming global business. The internet giant opened its first brick and mortar book store in Seattle on November 3rd.

“They didn’t need to have an outlet, but they did it simply because they need convergence between the internet and the real physical world. This is something we see more and more.”

Lévy defies us to define precisely what Amazon is. “An e-commerce company? A cloud computing company? Are they defining and designing the tools they’re using? Are they a new media?

“Media and advertising are core to all developments in the internet world,” Lévy continues. “Not only is the content changing, but corporations are moving from something that was quite clear, such as producing, packaging, branding and distributing goods. Today they have their own e-commerce, and they are developing content and transforming their websites into own media. All the lines are blurring. If we don’t transform our businesses, we will be buried.”

Lévy sees similar convergence between broadcast and print journalism. “Newspaper groups are integrating internet, mobile communications and other digital means. They are progressively moving towards monetisation of their digital content, which is new.”

For the past 20 years, Lévy says, “European start-ups who’ve reached a certain level have been unable to get the capital they need, so they’re tempted to sell to a US company.”

The EU Commission, the French and German governments, and Publicis, in partnership with the telecommunications company Orange, are attempting to address the problem by providing investment capital.

A decade ago, when French school-leavers were surveyed, roughly one-third wanted to become civil servants. It’s a positive sign, Lévy says, that the top ambition today is to found a start-up.

Lévy has served as president of the French Association of Private Enterprise (AFEP).

“I would not rank our political system as a great strength,” he says. He describes the Hollande administration’s policy towards business as “erratic” or “sinusoidal” like an electrocardiogram. “Sometimes they are pro-business. Sometimes they take decisions that are absolutely against business. This government made a lot of mistakes at the beginning and we are paying a heavy price. They decided to move towards a more business-friendly attitude. Unfortunately, some of their decisions destroy the very tenuous confidence which has been built.”

Asked for an example, Lévy cites the 2016 budget, which was supposed to reduce social charges from January 1st but postponed the move until April 1st.

“We are business people. We need to plan. You told us this. Why aren’t you keeping your word? Okay. It’s just the first quarter, but it has serious consequences. How can I trust these people and what surprises do they have in store for me?”

Airbnb, BlaBlaCar and UberPop are examples of what Lévy calls the power of the people. “The fact that we are in a sharing economy is much stronger than anything else,” he says.

Lévy met the founders of Airbnb.

“They had come up with 26 reasons not to start the company,” he recalls. “The first was having someone in your apartment who might be a murderer, a robber or would not take care of your precious things. The list got so long that they decided to scrap it.

“In San Francisco, there’s a small start-up where if someone is going from Sausalito to the Golden Gate, he posts a message and somebody says, ‘I’m 200 yards away and I’ll pick you up.’ This is going very fast and it’s changing the city’s transportation.”

The beauty of the “sharing economy” is that “people see it as something that helps them”, Lévy continues. “Millennials [18-30 year-olds] love it because it’s not what their parents do. If you call a taxi, they tell you it’s stupid, because they have a smartphone app and they can see a car three blocks away while you’re still waiting for the switchboard.

“Disruption,” Lévy concludes, “is something we have to expect in every single business.”