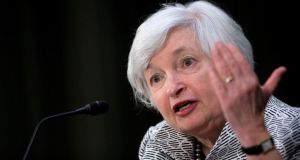 US Federal Reserve chairwoman Janet Yellen addresses a Senate banking committee hearing in Washington, DC, yesterday. She told lawmakers the central bank must press on with monetary stimulus as “significant slack” remained in labour markets and inflation was still below the Fed’s goal. Photograph: Andrew Harrer/Bloomberg

US stock markets rose yesterday, adding to earlier gains as investors bet that the US Federal Reserve would not adjust guidance about how soon it would raise interest rates.

There had been speculation that the Fed could raise interest rates sooner and faster than previously predicted, a theory that has supported the US dollar and pressured equities of late.

European exchanges were mainly down, having closed before Wall Street’s rally. Europe was under pressure ahead of the Scottish independence referendum, which kept investors on edge with polls suggesting the vote is too close to call.

The Iseq fell 0.71 per cent to 4824.9. A Dublin stockbroker described trading as “quiet with little major to report”. Among the movers Fyffes was up 2.11 per cent to 97 cents. Fyffes and US fruit producer Chiquita have offered concessions to EU competition regulators to calm fears that their proposed $526 million merger might reduce competition.

Glanbia fell back a modest 0.18 per cent, to €11.15. On Friday the global food and nutritionals solutions group announced a deal to buy US-based Isopure, a sports nutrition products maker, for $153 million.

The FTSE 100 Index fell for the second day this week as traders sat on their hands ahead of the Scottish referendum and this week’s meeting of US policymakers.

The top flight was 12 points lower at 6792.2, while European markets were down by a similar level as attention turned to the Fed.

Sports Direct International was the biggest faller in the FTSE – off 26p, but publisher Pearson was a strong riser, up 20p, after a ratings upgrade from Morgan Stanley.

Thomas Cook shares fell 6 per cent after it reported a moderation in bookings in Germany as consumer confidence weakens in the face of the euro zone’s subdued outlook and geopolitical events.

Housebuilder Crest Nicholson was also lower after it reported a slight moderation of sales rates in the last few months, albeit still significantly above historic norms. Forward sales at the start of the month were £348 million, up 11 per cent on a year earlier, but shares fell 10.9p.

European stocks fell to a two-week low amid speculation about the Federal Reserve and tomorrow’s vote on Scottish independence. The Stoxx Europe 600 Index retreated 0.3 per cent at the close. National benchmark indexes fell in 14 of the 18 western European markets.

Air France-KLM lost 3.3 per cent to €7.99. Chief executive Frederic Gagey said on Europe1 that a pilot strike costing €10-€15 million a day had cut the carrier’s chances of breaking even on an operating- profit basis in 2014.

Portugal Telecom, which is merging with Brazil’s Oi, rose 6.1 per cent to €1.78. Bloomberg reported that Telecom Italia is evaluating a potential acquisition of Oi to challenge Telefónica in the largest phone market in Latin America.

US stocks also rose with markets reacting to wavering expectations over the Federal Reserve and its future interest rate policy.

Glimcher Realty rose 30.26 per cent after Washington Prime announced its purchase for $4.3 billion. Atlantic Power fell 32.55 per cent after it said it would replace its chief executive and slash its dividend.

Among the most active NYSE stocks were Bank of America, down 0.12 per cent, and Petrobras, up 8.52 per cent. On the Nasdaq, Apple lost 1.3 per cent, Yahoo lost 0.1 per cent and Facebook gained 1.4 per cent. – (Additional reporting Reuters, Bloomberg)