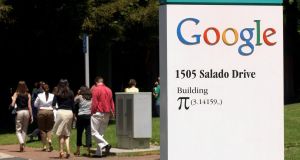 Google said it had updated its policies to gain more information about advertisers’ identities, business models and relationships with third parties to ensure users could trust the ads they are seeing.

The UK financial regulator has accused US tech giant Google of not doing enough to stop fraudsters using its internet search pages to target victims.

In response to questions at the Financial Conduct Authority’s annual public meeting on Thursday, the regulator’s enforcement boss, Mark Steward, said the steps being taken by Google to remove adverts for fake investments “fall short” - and were “creating a production line that proliferates scams”.

Under current laws, the FCA has no powers to force internet companies to refuse financial advertisements. It can only ask them to take down fraudulent promotions once they have been spotted. As a result, fraudsters and promoters of high-risk schemes have been able to place advertisements aimed at UK private investors on Google search pages.

London Capital and Finance, the unregulated mini bond issuer that collapsed in 2019 having taken £236 million (€259 million ) from small savers, spent £20 million on Google ads before its demise. The FCA has said its marketing promising returns of up to 8 per cent was misleading.

More recently, the FCA has engaged with Google to tackle such problems and now sends the tech group a list of adverts and websites it believes to be scams.

However, Mr Steward told the meeting that the system was not working. “Scammers are able to place glossy ads very easily and very cheaply. . .but even after names appear on our warning list, Google can’t find the ads to take them down.”

This enables fraudsters to play a “percentage game” in which their ads can be distributed to all internet users and after just one response “[They] are in profit already”.

Mr Steward added that Google’s own verification process for advertisers was unlikely to solve the problem. “The steps being taken are inevitably going to fall short,” he said. “Conducting verification after an advert is live is problematic. We?don’t yet know what the verification process entails and unless you’re not knocking on someone’s door, it not clear how it’s going to work. [Google] needs to put in intervention much earlier.”

To demonstrate the problem, FCA chair Charles Randell later showed journalists the latest Google search results for “high-return investment”, which included firms offering “50 per cent profit in one week” and “15 per cent income from “risk-free” bond investments. “These are all scams and whatever Google is doing, it’s not working,” he said.

Google said it had updated its policies to gain more information about advertisers’ identities, business models and relationships with third parties to ensure users could trust the ads they are seeing.

“Protecting the community from ad scams and fraud is a key priority for Google,’ the company said. “This policy update follows months of engagement with and input from the FCA to ensure we’re effectively addressing the bad actors responsible for predatory financial ads.”

Mr Randell said the FCA had asked the government to extend its proposed Online Harms legislation to include financial promotions but called on Google and other tech firms to act voluntarily. He noted that the social media platforms Twitter and Instagram - and “influencers” that post content on them - were also tainted by scams.

In the meantime, the regulator has continued to pay for its own Google ads to warn consumers about online scams. In April, a Freedom of Information request by Financial Times publication FT Adviser revealed this had been costing about £45,000 a month. “Imagine how deeply frustrating I find it that Google is earning money from these adverts and also earning money from us,” Mr Randell said.

His comments came on the same day that banking industry group UK Finance said fraud was increasingly moving online. Its latest report found criminals had been exploiting Covid-19 to target victims over internet and mobile channels.

Earlier at the meeting, consumer campaigners asked why the FCA was taking so long to complete an investigation into the failed Woodford Equity Income Fund, but rushing through changes to its own complaints scheme before reviews of three other scandals are published.

Gina Miller, the former anti-Brexit activist, said that refusing to delay the complaints changes until the reviews are complete was “a kick in the teeth to the millions of investors who lost their life savings” in LCF, the Connaught Income Fund and the HBOS Reading fraud. Independent reports into the FCA’s handling of these cases are due later this autumn.

In response, the FCA said its consultation on complaints had been extended by a month, and the Woodford investigation remained “a very high priority” that was being worked on “continuously”. – Copyright The Financial Times Limited 2020

1 Fair deal? Family at odds with hospital and each other not so sure
2 What to consider if older person or loved one needs care at home
3 AIB settled Citigroup dispute over Rusnak at fraction of $872m claim
4 British business groups sound alarm over no-deal Brexit
5 ‘I hate haggling because I hate when people do it to me’
6 Roll up, roll up: capitalism will drive cannabis legalisation in Ireland
7 Institutional investors spend €470m on residential properties in latest quarter
8 Monsoon landlords win challenge over creditors arrangement that cut rents
9 Prominent Dublin pub baron’s group to open other new boutique hotels in 2018
10 Streaming services set for Christmas battle after drama-filled year
Real news has value SUBSCRIBE