At least 26 people killed in two explosions in Belgium 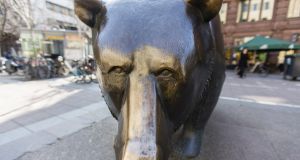 The Frankfurt Stock Exchange. European trading has been affect by the attack in Belgium. Photograph: Martin Leissl/Bloomberg

European shares fell on Tuesday with travel and leisure stocks leading the market lower after attacks at Brussels airport and in the city’s metro system killed at least 34 people.

A suicide bomber blew himself up at Brussels airport and a further blast tore through a rush-hour metro train in the capital shortly afterwards.

“Geopolitical risk, including acts of terrorism which directly affect trade or movement, remains a significant risk factor to monitor,” said Lorne Baring, managing director of B Capital Wealth Management in Geneva. “In a period where there is suboptimal growth both in Europe and globally, combined with equity valuations that are no longer cheap, there exists an environment which is susceptible to shocks that can act as a trigger for falls in asset prices.”

The Iseq was down 0.4 per cent after midday, trading at 6,157.74 .Shares in Ryanair lost more than 4 per cent on the opening of trade in Dublin, but recovered some of the losses over the morning. At 11.30am shares were trading at €13.375, almost 2.4 per cent lower on the previous day.

Investors remained focused on unfolding events in Brussels, although there were some positive data releases that brought some relief for the region’s growth prospects and helped European equity markets come off earlier lows.

German business morale rose in March as the retail sector profited from buoyant consumer sentiment, while euro zone business activity ended the quarter on a higher note. This suggested extra stimulus from the European Central Bank may already be having a positive effect.

“The just-announced ECB stimulus, while not a game changer for growth, should neutralise some of the downside risks ... But today’s ugly events in Brussels add further uncertainty to the outlook,” said UniCredit economist Edoardo Campanella.

US stock index futures were lower, while traditional safe havens gold and government bonds firmed up as reports of the events in the de facto capital of the European Union unfolded.

Shares of American Airlines, Southwest Airlines , Delta Airlines and United Continental Holdings were down between 3.4 per cent and 1.1 per cent in premarket trading. Delta and United Airlines rerouted flights to other locations following the attacks.

Gold rose 1 per cent to $1,255 an ounce, while oil prices were swept lower by investor nervousness.