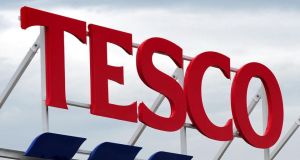 In London, supermarket giant Tesco was back under pressure with a decline of nearly 3 per cent or 4.6p to 180.6p. Photograph: Rui Vieira/PA Wire.

European stocks were little changed today as investors signalled they are likely to hold fire until they see stronger signs of a recovery. Values slumped by 4.1 per cent last week on the back of an International Monetary Fund report that cut global growth forecasts.

Deutsche Postbank strategist Heinz-Gerd Sonnenschein told news agency Bloomberg that investors have grown impatient waiting for a recovery. “They will want to pull money out of Europe and come back when they finally see a real, fundamental improvement,” he said.

The biggest gain in the FTSE 250 Index came from Synergy Health after the firm agreed a takeover offer worth £1.2 billion from US-based rival Steris. Shares in Synergy were 31 per cent higher, a rise of 440p to 1840p.

Apple chip designer Arm Holdings was down 2 per cent or 20.5p to 822p after big losses for the tech-laden Nasdaq index on Wall Street on Friday.

Supermarket giant Tesco was back under pressure with a decline of nearly 3 per cent or 4.6p to 180.6p. It came as brokers at Cantor Fitzgerald highlighted the potential disruption to Christmas trading caused by the inquiry into the grocer’s profits over-statement.

Meanwhile, shares in chocolate maker Thorntons were at a 12-month low after it said sales through commercial channels fell 12.8 per cent to £20.8 million in the 14 weeks to October 4th. The company’s shares slid 4 per cent to 95p.

Luxottica tumbled 9.2 per cent to €37.29 after the manufacturer of glasses lost its second chief executive officer in little more than a month. Another heavy faller was STMicroelectronics, which slipped 5.37 per cent to €5.29 in Milan after rating downgrades from both Morgan Stanley and JPMorgan in the wake of a revenue warning from US tech firm Microchip.

Vienna Airport jumped 18 percent to €72.89 after the group said Australia’s IFM Investors plans to buy a stake of up to 29.9 per cent.

Shares in Pershing Square, a fund run by US activist investor Bill Ackman, sank 12 per cent on their debut today on the Euronext Amsterdam exchange. The shares were initially priced at $25, giving the fund a market capitalisation of $6.2 billion, and closed their first session at $22.

Newly-merged auto manufacturer Fiat Chrysler gained 1.22 per cent to €7.025 in Milan while the stock was making its debut in New York.