Most continental markets closed for May Day holiday 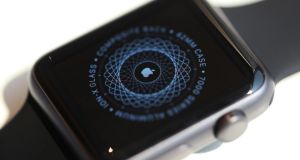 In New York, Apple gave the biggest boost to the Nasdaq and the S&P 500 with a 1.2 per cent increase to $126.66. Photographer: Billy HC Kwok/Bloomberg

It was a quiet day of trading yesterday as most markets across continental Europe remained closed for the May Day holiday.

The Iseq in Dublin was open, however, gaining 0.3 per cent on low volumes heading into the bank holiday weekend.

Wall Street was up, after a report showed manufacturing in April held at the weakest pace in almost two years. A separate report showed consumer confidence increased in April to the second-highest level in more than eight years as US consumers grew more upbeat about their financial prospects.

Markets were also open in London, where the top equity index gained ground after a surge in the shares of Lloyds bank and miners, but caution before next week’s national election kept a lid on progress.

Kenmare Resources gained 4 per cent on light volumes in the afternoon, to close the session at 5.2 cents. The Africa-focused mining company could be acquired by Australian firm Iluka, which would bring an end to three decades of Irish ownership of the stock.

Smurfit Kappa Group was by among the most heavily traded stocks on the Iseq yesterday. The stock, which announced first quarter results slightly behind estimates, opened the session down and remained that way, closing down 1.12 per cent. Its results included a €14 million currency hit, while chief executive Gary McGann announced his retirement.

Kerry Group nudged ahead by a quarter of a per cent to close the day at €65.71 a share. The company announced solid first quarter results earlier in the week, while an analyst report yesterday from Davy suggested the company is on the trail for acquisitions.

While the benchmark measure rose for a third time in four months in April, stock volatility climbed to its highest level since January before next week’s general election. The FTSE All-Share Index rose 0.3 per cent.

A rally in the financial sector and commodity producers drove markets forward. Lloyds jumped 7.1 per cent as it said it would exceed its lending profitability target after first-quarter earnings beat analyst estimates.

Miners gained with Anglo American, Rio Tinto Group and BHP Billiton up more than 3 per cent. Aberdeen Asset Management and Hargreaves Lansdown fell 2.5 per cent for the biggest declines in the FTSE 100.

The Nasdaq biotech index was up 2.6 per cent by yesterday afternoon, ending a five-day losing streak. Apple gave the biggest boost to the Nasdaq and the S&P 500 with a 1.2 per cent increase to $126.66.

Seven of the S&P 500’s 10 main groups rose, with raw-material and healthcare companies strongest. Alcoa jumped 4.8 per cent after an upgrade, its biggest gain since December, and Eastman Chemical added 4 per cent near a five-month high to lead materials.

Yum! Brands surged 5.8 per cent, the most in more than a year, after Dan Loeb’s Third Point disclosed a “significant stake” in the restaurant operator, saying its business in China would recover from recent food-safety issues.

Energy companies declined along with oil after posting their best monthly gain since January 2013. Chevron Corporation fell 2.4 per cent, the most in more than two months, after reporting better-than-estimated quarterly earnings.

LinkedIn lost 21 per cent, the sharpest drop since it went public almost four years ago. The website delivered quarterly revenue that missed analysts’ estimates for the first time, shaking confidence in a historically stable business plan.