After Brexit and US election, markets may be better prepared for vote shock, analyst says 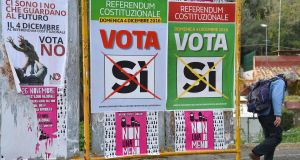 Europe’s financial markets are bracing for Italy to reject the government’s constitutional reforms in Sunday’s referendum, with investors warning that an emphatic No vote would risk a sharp sell-off in Italian assets.

Although there has not been panic ahead of the vote, there are signs of some nerves among money managers and traders whose attention in recent weeks has been dominated by the reflation trade unleashed by Donald Trump’s US election win.

In the past three weeks, global investors have removed $100 million (€93.7 million) from Italian equity funds, while Italian 10-year government bond yields are trading at levels not seen since 2015.

At the root of the unease over Italian assets is not fear about the success of a package of institutional reforms but about the way the referendum is being viewed by Italians as a chance to vote against the government. Matteo Renzi, the Italian president, has promised he will resign if he loses, a move that could lead to earlier parliamentary elections and greater support for the anti-establishment Five Star Movement (M5S), which has campaigned against Italy’s membership of the euro zone.

After the shock of Brexit and Mr Trump’s victory, investors seem better prepared for a possible No vote, said Alberto Chiandetti, a Milan-based European equities portfolio manager at Fidelity International.

“Italian assets are suffering a fade-out,” he said. “We are seeing the steady disengagement of international investors. There haven’t been sharp swings in prices because investors have known about the referendum for a long time. But at the moment the expectation is for the vote to be close. A landslide No vote would mean even greater political risk and a much sharper sell-off.”

While polling has stopped ahead of the vote, the most recent surveys of voters showed the No vote a few points ahead.

With one of the highest public debt ratios in Europe, a long period of low growth and a troubled banking sector in need of recapitalisation, the financial impact of a No vote in the referendum is expected to be negative, leading to higher bond yields, lower share prices and a weaker euro.

Italian creditworthiness, as judged by investors, is already falling, with the cost of insuring Italian bonds against default the highest it has been since the UK voted for Brexit, according to Markit data.

Meanwhile, the FTSE MIB index of Italian stocks is down 18 per cent in 2016, while investors are demanding an extra 163 basis points to hold Italian government bonds instead of German bunds, up from 97 basis points at the start of the year. In the event of a No vote, UBS predicts that this spread could reach 200 basis points, caused by a knee-jerk selling reaction from investors.

Italy’s referendum is the first of a series of important elections in Europe in the coming months, with France, Germany and the Netherlands all going to the polls in 2017. There are fears that the elections could herald further gains for populist, Eurosceptic political parties in Europe.

The heightened uncertainty, coupled with expectations of greater US economic strength, has encouraged investors to pull money out of Europe in recent weeks. European equity funds lost $2 billion (€1.87 billion) in the week to November 30th, according to data from EPFR, while European bond funds lost $1.9 billion in the fourth straight week in which investors have removed funds.

The euro itself has been relatively calm, holding steady at $1.06 (€0.99) ahead of the Italian referendum, but the cost of insuring against volatility in the euro surged to a six-month high earlier this week.

However, FX analysts doubt a euro sell-off is inevitable on the back of a No vote. Derek Halpenny at MUFG gave three reasons for this: the European Central Bank (ECB) would probably act to limit market volatility; there are signs of dollar strength fading; and trends showed an end-of-bias in favour of the euro.

The sell-off in Italian bonds has also calmed in recent days amid reports that the ECB is preparing to increase its bond-buying plans.