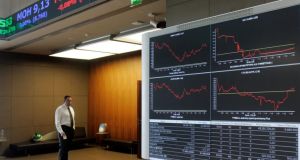 Two years after being at the epicentre of the European sovereign debt crisis, Greece has returned to the bond markets to much fanfare with a heavily subscribed €3 billion five-year deal offering a yield of just 4.95 per cent.

The new transaction, which marks Greece’s first international bond issue in four years, has attracted more than €20 billin of interest from over 550 investors, including €1.3 billion of lead manager interest.

The bond’s success is shaped by the low-yield environment and is in great demand with investors as they cast aside memories of the painful haircut Greece inflicted just two years ago.

“Yields everywhere have been falling, and so, like in many asset classes, investors will be getting paid something for the risk that they are taking, but that risk premium is probably below historical levels for a commensurate risk,” said Colm D’Rosario, senior portfolio manager, emerging markets and high yield, at Pioneer Investments.

Earlier today, guidance was set at 5 per cent area with the order book over €17.5 billion. Greece began marketing the deal on Wednesday afternoon, when US bond markets opened, with a 5 per cent to 5.25 per cent range. The deal is seen by some investors as the culmination of an impressive recovery and restructuring story.

One portfolio manager based in London said it is still quite wide compared to Portugal and that the spread will tighten further. “I would say it can get to 4.625 per cent, as there will be much unsatisfied demand,” he said.

1 ‘Saudi Arabia is where the opportunities will happen in future’
2 MSD buys Takeda biologics plant in Dunboyne
3 State’s biggest landlord records 30% rise in rental income
4 Wirecard was looted before collapse, German prosecutors suspect
5 Irish tourism must also help itself to survive the pandemic
6 Scars from the crash give Irish banks 2.6 billion reasons for Covid caution
7 Refurbished Cafe en Seine doubled sales to €9.5m before pandemic
8 Identigen founders make €12m each from sale of company
9 Facebook agrees Irish wind-farm deal with Brookfield in Tipperary
10 What will the office market look like after the great remote working experiment?
Real news has value SUBSCRIBE