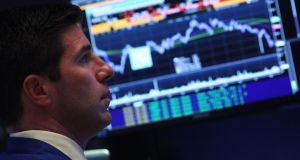 European equities gave up early gains, with commodities stocks the hardest hit, as US crude fell more than $1 to $44.39 a barrel. Photo: Getty Images

Fresh government intervention to support China’s jittery markets and bets on a more dovish stance from central bankers provided limited respite from a stock market sell-off on Wednesday as oil resumed its fall.

European equities gave up early gains, with commodities stocks the hardest hit, as US crude fell more than $1 to $44.39 a barrel. Brent crude was down 89 cents to $48.67.

There had been some early relief after Chinese stocks managed to bounce from steep losses and end the day flat, following fresh supportive measures from brokerages eased investor fears of a trading crackdown from Beijing.

Benchmark indexes in Paris, Frankfurt and Milan were broadly flat and outperforming a slightly negative European market at 0842 GMT.

“Trader and investor nerves are a bit fragile at the moment...People are just unsure at the moment of whether this is a good buying opportunity or not,” said Paul Chesterton, a trader at brokerage Peregrine & Black.

A recent surge in financial market volatility, driven by fears over China’s economic slowdown and its impact on world growth, has seen the Chinese central bank pump cash into the economy and also fuelled bets that the US Federal Reserve will delay raising interest rates as early as this month.

With the European Central Bank’s policy meeting due on Thursday, traders said there were growing expectations for a dovish stance in the wake of the market turmoil. The ECB launched its bond-buying scheme, or quantitative easing, this year and it has pledged to intervene further if needed.

“The likelihood is that he is going to adopt a dovish posture given the rising global headwinds and the market will pay particular attention to the inflation forecasts for 2016 and 2017.”

German 10-year yields, the benchmark for euro zone borrowing costs, were 1 basis point lower at 0.79 per cent. Yields on other top-rated bonds were down by a similar amount.

The US dollar rose and took the heat out of a rush to unwind carry trades that boosted the safe-haven yen and the low-yielding euro in recent weeks.

“There has been a moderation in risk aversion with European stocks and Wall Street stock futures in the green. That has seen the yen give up some of its recent gains,” said Alvin Tan, currency strategist at Societe Generale.

“US payrolls will be the focus, but I doubt it will change the current debate over whether the Federal Reserve will hike rates in the near term or not.”

Emerging market stocks fell for the third straight day, down half a percent and approaching recent 6-year lows while the rouble extended the previous session’s 3.8 per cent fall against the dollar which was the biggest one-day loss in three months.