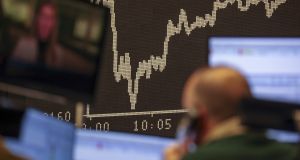 A Frankfurt trader watching news on a television monitor as the Dax shows a drop. Photograph: Alex Kraus/Bloomberg

European shares slipped on Friday, ending a frantic week in a subdued mood as worries mounted over the impact of the resurgent Covid-19 pandemic and diminishing prospects of a Brexit trade deal.

Sterling fell after Britain’s prime minister Boris Johnson said it was “very, very likely” that the UK would exit the EU without a deal.

While EU leaders unblocked a €1.8 trillion financial package late on Thursday, in the US fiscal stimulus continued to appear unlikely after Democrat house speaker Nancy Pelosi suggested the wrangling could drag on.

The Iseq slid 1.1 per cent in line with the sombre trading seen on the major European indices. Irish banks joined in the negative trend for financial stocks across the region, with AIB ending 2.5 per cent lower at €1.50, and Bank of Ireland losing 1.5 per cent to finish just below €2.84.

Building materials group CRH was also in the red, with the index heavyweight closing 1.5 per cent lower at €32.44, while Ryanair continued its descent with a 3.2 per cent drop, closing at €15.48.

After surging 44 per cent on its Dublin listing on Thursday on news that its founders and US investor Blackstone intend to take the company private, petrol station chain Applegreen edged down 1.8 per cent to €5.50, though the stock climbed 1 per cent on its London listing.

The blue-chip FTSE 100 index fell for the first time in nine sessions, closing 0.8 per cent lower, while the mid-cap FTSE 250 posted a 0.7 per cent drop.

The exporter-heavy FTSE 100, which normally makes gains when sterling weakens, was unable to do so on this occasion as investors reckoned London-based multinationals would be impacted by a no-deal scenario triggering millions of pounds worth of trade tariffs.

Rolls-Royce was the worst performer. The engineering giant slumped 7.9 per cent after it downgraded this year’s cash outflow forecast and warned the outlook remained challenging.

Supermarket stocks Tesco and Sainsbury’s moved 2.95 per cent and 3.1 per cent lower respectively after concerns grew that they will be expected to absorb the impact of tariffs or ask their customers to pay higher prices for food imported from the EU.

The pan-European Stoxx 600 index slid 0.8 per cent, extending losses after a dour 2021 economic forecast from the European Central Bank pushed it into the red on Thursday.

In Frankfurt the Dax was almost 1.4 per cent lower after Covid-19 cases rose, while the Cac 40 in Paris ended down 0.8 per cent.

French pharmaceutical company Sanofi’s 4 per cent slide weighed the most after it said its Covid-19 vaccine candidate developed with GlaxoSmithKline showed an insufficient immune response in clinical trials. GSK shares were trading 0.3 per cent lower.

Telecom gear maker Ericsson slid after filing a US lawsuit against Samsung for alleged breaches in negotiations for royalty payments and to licence patents.

Stocks dropped as the impasse over an almost $1 trillion stimulus package signalled slimmer chances of an imminent deal, with lawmakers also scrambling to avoid a government shutdown at midnight. As coronavirus cases swept across the nation, concern about tougher restrictions also kept investors on edge.

The S&P 500 headed toward a weekly slide as trading volatility increased. Apple and Intel dragged down the Nasdaq 100, and Tesla tumbled on an analyst downgrade.

Disney soared to an all-time high after a bold forecast for its new streaming services.

After its shares more than doubled on its Thursday market debut, Airbnb held on to its gains in early Friday trading.

Covid-19: Little room for error if tourism is to reopen for staycations 05:23
Moving to a right-sized home: What are your options? 05:11
TikTok sets up European council to advise on content moderation policies 04:56
Dublin most popular city for Brexit relocations by financial firms 04:44
Stocktake: Beaten down UK stocks are the ‘trade of the decade’ 00:00