Ryanair firmly in the red with AIB, Flutter, and CRH also weighing on Iseq index 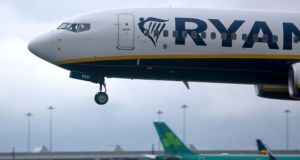 Ryanair was down 6.2 per cent in Dublin on Friday.

European equities closed lower on Friday as bond yields rose on inflation expectations that were pushed up by strong US payrolls data, although the Stoxx 600 index marked a weekly gain on strength in growth-sensitive sectors.

The Iseq underperformed its European peers on Friday with heavyweight stocks including Ryanair, AIB, CRH and Flutter weighing. The index closed down 2.3 per cent to 7629.67.

Ryanair was firmly in the red, down 6.2 per cent to €15.64 with investors concerned about the possibility of the oil market overheating.

CRH was also a victim of investors’ concerns about oil. It closed down 2.5 per cent to €38.23 with its US peers having been weak overnight.

After a good run midweek following publication of its latest results, Flutter gave back some of its gains, dropping 2.7 per cent to €170.7.

London’s FTSE 100 ended down on Friday as concerns around US bond yields and sluggishness in the British housing market outweighed strength in energy stocks and weakness in the pound.

But the blue-chip FTSE 100 index logged its best weekly gain in nearly two months as investors bet on an eventual reopening and recovery of the economy as Covid-19 vaccinations gained momentum.

The index ended 0.3 per cent down, with industrials and consumer discretionary stocks, including Melrose Industries, BAE Systems, International Consolidated Airlines Group, and Ashtead Group weighing the most. Further losses were capped by oil majors Royal Dutch Shell and BP, while export-oriented stocks benefited from weakness in the pound.

In company news, equipment rental company Aggreko rose 0.7 per cent, as it backed a £2.32 billion buyout offer from private-equity firms TDR Capital and I Squared Capital.

London Stock Exchange Group plummeted 14.4 per cent to the bottom of the blue-chip index, even after announcing a 7 per cent dividend increase as analysts grew skittish over costs associated with its $27 billion acquisition of data and analytics company Refinitiv.

The pan-European Stoxx 600 dropped 0.8 per cent on the day, with shares of travel and financial services firms leading losses. But the index rose 0.9 per cent for the week, as optimism over an eventual economic recovery this year saw investors pile into sectors most likely to benefit from a bounceback.

Technology was the weakest-performing European sector for the second week in a row, while utilities and healthcare also lagged.

US stocks slumped in volatile trading on Friday with the tech-heavy Nasdaq heading for its worst week since March 2020, as fears over rising borrowing costs offset optimism about a strong economic rebound following a blowout monthly jobs report.

The benchmark 10-year US Treasury yields hit a new one-year high of 1.626 per cent after nonfarm payrolls increased by 379,000 jobs last month.

The three major indexes gained in early session on prospects of an improving economic outlook.

Oracle jumped about 6 per cent after Barclays upgraded the business software maker to “overweight” expecting improvement in the IT spending environment. – Additional reporting: Reuters

9 Cartoon Saloon boosted by deals with Apple and Netflix