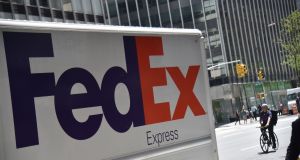 FedEx shares were on course for their sharpest one-day percentage drop since the financial crisis.

European shares ended flat on Wednesday, as gains for the defensive real estate and utilities sectors were countered by losses in luxury good makers, with caution prevailing ahead of the US Federal Reserve’s interest rate decision.

After flitting between small gains and losses during the session, the pan-European Stoxx 600 closed with a tiny 0.02 per cent gain ahead of the US central bank’s monetary policy statement.

The Dublin market lagged other European bourses on Wednesday, closing down 0.6 per cent at 6071.87.

Irish banks remained weak with Bank of Ireland 3.5 per cent lower and AIB slipping 2 per cent.

Troubled Swiss-Irish food group Aryzta was among the biggest fallers, down 3.6 per cent on Wednesday.

Housebuilder Cairn Homes was one of the few gainers, closing up 2.5 per cent. Ires Reit, the country’s largest landlord, rose 1.8 per cent.

London’s main share index weakened on Wednesday, underperforming its European peers ahead of the US Federal Reserve rate decision, with home improvement retailer Kingfisher falling the most on the bourse as it struggled to lift its earnings.

Housebuilders Taylor Wimpey, Barratt Development and Persimmon fell between 1.3 per cent and 1.8 per cent as Aer Lingus and British Airways owner IAG added 1.9 per cent after BA pilots called off a strike set for later this month.

Royal Mail slipped 4 per cent after it confirmed that the Communication Workers Union (CWU) intends to ballot its members for industrial action against the postal company.

Small-cap Pendragon fell 10 per cent to a more than seven-year low after the car dealership chain cancelled its dividend and issued a bleak forecast as deep price cuts to offload used car inventory pushed it to a first-half loss.

Shares in Italy’s biggest utility Enel jumped 2 per cent, helping the index of Milan-listed shares outperform its European peers. The index has gained about 10 per cent from its August lows, largely due to the formation of a new government.

Swiss luxury goods group Richemont fell 6 per cent, while shares in Moncler dropped 7 per cent after its chief executive said the ongoing unrest in Hong Kong could have an impact on its business this year.

French utility EDF gained 3.2 per cent after it said there was no need to close any of its nuclear reactors for now following the discovery of problems with weldings.

Apple’s component suppliers AMS, STMicro and Infineon posted some of the biggest gains on the European technology subsector after strong pre-orders for the latest iteration of iPhone.

US stocks came under pressure in early trading on Wednesday after a profit warning by FedEx, while investors waited for a decision on interest rates and clues on the future of US monetary policy from the Federal Reserve.

Shares of the package delivery company tumbled 14 per cent and were on course for their sharpest one-day percentage drop since the financial crisis after FedEx blamed US-China trade tensions and a split with Amazon for its dismal full-year profit forecast.

Adobe fell 2.3 per cent after the Photoshop software maker forecast tepid revenue for the current quarter. In a bright spot, Versace-owner Capri Holdings rose 2 per cent as Jefferies raised its price target on the stock. – Additional reporting: Reuters