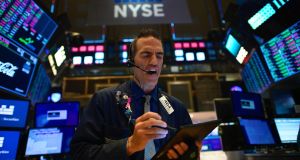 Oil prices soared on Monday after attacks on crude facilities in Saudi Arabia sparked worries over the impact of an oil shock on economic growth, halting a positive run in world stocks as investors reached for less risky assets.

Increased demand for safe-haven US debt pushed Treasury yields lower, while gold and the safe-haven currencies, including the Japanese yen and Swiss franc, strengthened. The attack on Saudi Arabia shut 5 per cent of global crude output. US officials blamed Iran and US president Donald Trump said Washington was “locked and loaded” to retaliate. Oil prices surged nearly 20 per cent at one point on Monday, with Brent crude posting its biggest intraday gain since the 1990-1991 Gulf crisis, before paring gains to trade up about 10 per cent on the day.

The Iseq fell 1.2 per cent to 6,206 mirroring losses elsewhere in Europe. Ryanair outpreformed rivals, falling 1.3 per cent to €10.28, on the back of surging oil prices. As the Brexit process again seem to veer towards a no-deal after no signs of progress in UK prime minister Boris Johnson’s first face-to-face meeting with European Commission president Jean-Claude Juncker, the Iseq’s main financials suffered. Bank of Ireland was down nearly 4 per cent at €3.89 while AIB was down 1 per cent €2.71. Travel software group Datalex, which has been rocked over accounting irregularities, rose 10 per cent to 91 cents.

Index heavy weight CRH was down 2.3 per cent at 31.17 amid a weakness in global stocks generally. Insulation maker Kingspan was down 1.4 per cent the same reason. Property companies Hibernia and Ires Reits were down between 1 and 2 per cent in anticipation of a report showing rising construction costs.

Britain’s blue-chip index dropped on Monday as non-oil stocks took a hit from mounting geopolitical risks and growth concerns after crude prices rose due to the attacks on Saudi Arabian production facilities.

The FTSE 100 slipped 0.6 per cent overall, but a 4 per cent gain in BP and 2 per cent in Shell kept a lid on losses. The FTSE 250 was down 0.7 per cent. The attacks on Saturday shut about 5 per cent of global supply, triggering the biggest intra-day percentage gain in Brent crude since the Gulf War in 1991. “It looks like investors assess the situation as having potential to further weigh on a geopolitical landscape already beset by the slowing global economy, Brexit and trade,” City Index analyst Ken Odeluga said.

The FTSE banking index lost 1.7 per cent and the mining index slid 1.6 per cent. Meanwhile, the FTSE oil & gas index jumped 2.8 per cent on its best day in seven months. Premier Oil and Tullow Oil gained the most on the index. “Explorers like Premier Oil, Cairn Energy and Tullow Oil were even bigger beneficiaries as they stand to gain the most from supply shortages and disruption to existing channels,” Markets. com analyst Neil Wilson said.

In news-related moves, telecoms company BT rose 3.4 per cent to be among the top gainers on the main index after its chief executive bought shares in the company. Wealth manager St James’s Place fell 2.7 per cent, with traders citing a report that said the company would likely axe a bonus scheme for its partners. African diamond miner Petra Diamonds slipped 5.8 per cent to hit an all-time low after it missed annual profit forecasts, as a Sino-US trade row and protests in Hong Kong dented demand in big Asian markets.

Shares in Airbus and French luxury goods exporters fell on Monday as the European Union acknowledged it may face US tariffs in a long-running dispute over aircraft subsidies, part of an escalating tit-for-tat trade row. The World Trade Organisation has approved a US request to impose tariffs on European goods in the latest chapter of a dispute over aircraft subsidies that could lead to European reprisals, sources said.

Shares in Airbus, which relies on a flow of parts to feed an assembly line in Alabama, and which also counts US airlines among its major customers for aircraft assembled at its main plants in Europe, fell 3.2 per cent. Luxury goods group LVMH – whose products include Louis Vuitton handbags, Moet et Chandon champagne and Hennessy cognac – fell 3.5 per cent.

US stocks fell on Monday on global growth worries after weekend attacks on Saudi Arabia’s crude facilities hit 5 per cent of the world’s supply, but a sharp jump in crude prices lifted beaten-down energy stocks and kept losses in check.

The attack on the world’s biggest oil exporter sent oil prices up more than 20 per cent before easing as various nations said they would tap emergency reserves to ensure stable supplies. The S&P 500 energy, one of the worst performing sectors so far this year, soared 2.36 per cent.

Shares of Apache, Marathon Oil and Hess jumped between 8.8 per cent and 10.1 per cent and were the leading gainers on the benchmark index. “The oil spike - higher prices globally – could slow world spending on items other than oil and that’s the main concern,” said Rick Meckler, partner at Cherry Lane Investments. Anticipation of higher fuel costs drove down shares of airlines and cruise line operators. American Airlines Group, Delta Air Lines and Carnival Corp fell between 2.2 per cent and 5.1 per cent. Shares of defence companies Raytheon, Lockheed Martin, Northrop Grumman rose between 1.1 per cent and 2.6 per cent. – Additional reporting by Reuters