Ryanair, EasyJet and IAG gain ground as C&C climbs ahead of interim results 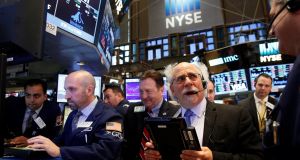 Traders work on the floor of the New York Stock Exchange. A rally in Boeing’s shares helped the Dow reverse course in the early afternoon session, while Apple continued to weigh on the Nasdaq and the S&P 500. Photograph: Brendan McDermid/Reuters

European shares slid for a third day on growing worries about the health of the region’s companies as energy producers suffered from declines in oil prices.

Dealers in Dublin said that other airlines appeared to benefit from the news that British Airways, which is part of IAG, had struck a deal to tackle its pension deficit.

Cider maker C&C climbed 3.46 per cent to €3.59 as investors looked ahead to the manufacturer of Bulmers publishing interim results on Thursday morning.

Dalata Hotels, which announced a deal in Welsh capital, Cardiff, dipped 0.10 per cent to €4.09.

Index heavyweight, building materials group, CRH, was off 0.75 per cent at €29.915. However, volumes were light with just 700,000 of its shares changing hands in Dublin.

Insulation and building materials giant, Kingspan, fell 2.67 per cent to €22.60 as it continues to face a squeeze in the supply of a component for one of its products.

Aer Lingus owner IAG climbed 5 per cent to 422.7 pence sterling on the back of news that one of its other subsidiaries, British Airways, has agreed a deal to plug the shortfall in its pension plan, opening the prospect of it paying dividends to its parent.

Drugs giant GlaxoSmithKline dipped 3p or 0.18 per cent to 1,626.5p despite profits soaring in the third quarter, aided by sterling’s slump following the EU referendum.

The company said turnover rose 23 per cent to £7.5 billion in the three months to September 30th compared to a year earlier, while operating profit jumped 35 per cent to £2.3 billion over the same period.

The owner of Clydesdale and Yorkshire banks, CYBG, was in the red after confirming that it had made an offer to buy Williams & Glyn branches from Royal Bank of Scotland (RBS). CYBG says it has held talks with RBS, but stopped short of disclosing the terms of the offer. Shares in CYBG were down 0.26 per cent to 271.4p, while RBS rose 0.72 per cent to 193.7p.

Losses worsened in the Stoxx Europe 600 Index, which dropped the most in more than a week.

Yesterday the gauge fell 0.9 per cent before ending the day 0.4 per cent adrift. In three days of trade it has lost half the ground made last week on news that the European Central Bank intended to extend its stimulus programme.

Real estate companies fell the most since the first week in October and other bond proxies suffered, as debt yields climbed.

Chemicals giant Bayer retreated 1.5 per cent after reporting a slide in profits at its consumer health business. Builder Vinci lost 1.2 per cent as its revenue fell. Danish enzyme maker Novozymes sank 11 per cent after its sales and earnings missed projections.

French computer services company Capgemini tumbled 7.3 per cent, the most since June, after reporting a drop in revenue.While most European stocks fell, Kering was among the biggest gainers in the Stoxx 600. The Gucci owner jumped 7.8 per cent after posting its fastest sales growth since 2012.

Logitech International surged 17 per cent, the most since January 2014, after the Swiss electronics manufacturer reported better-than-projected revenue gains. Renault added 3.2 per cent as its sales topped estimates. Airbus Group climbed 3.8 per cent after saying it will cut jobs across its business.

A rally in Boeing’s shares helped the Dow reverse course in the early afternoon session on Wednesday, while Apple continued to weigh on the Nasdaq and the S&P 500.

Chipotle Mexican Grill was on track for its worst day this year, with its shares off 8.2 per cent after the restaurant chain operator reported a bigger-than-expected drop in quarterly sales.

Edwards Lifesciences was the biggest loser on the S&P 500, falling 13.6 percent after the medical device maker reported third-quarter sales that missed expectations.

1 How long can Government afford to keep State pension age at 66?
2 In praise of Gogglebox Ireland, an essential service in all but name
3 Retailers accused of ‘stealing business’ from rivals by flouting restrictions
4 Outgoing Irish a sitting duck for Covid
5 Nama grants Ronan four-month extension on €160m glass bottle site deal
6 ‘French people are pretty relaxed. They don’t pander to scaremongering or hysteria’
7 How to improve ethics at your company
8 Budget 2021: fuel prices rise and high-emission cars hit
9 Wake-up Call: Why unethical high performers are not shunned by peers
10 Mamas & Papas collapses into administration
Real news has value SUBSCRIBE