Leading Irish stocks quiet ahead of 2013 results next week 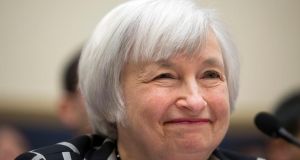 DUBLIN
In Dublin, Hibernia REIT , which earlier this week announced it was buying a portfolio of loans secured mainly against residential properties owned by Dorville Homes, rose 1.85 per cent to close at €1.10.

Independent News & Media gained 6.71 per cent to 15.9 cent. Many of the leading stocks that are due to publish preliminary results for 2013 next week were quiet. Index heavyweight CRH , due to report on Tuesday, gained 0.22 per cent to end the day at €20.10.

LO NDON
Vodafone rose 3 per cent to 236.5 pence. The telecommunications company’s adjusted valuation after the disposal of its stake in Verizon Wireless may make it an attractive target for US giant AT&T , according to UBS analyst Nick Lyall. AT&T said on January 27th that it does not plan to make an offer for the UK wireless carrier, meaning takeover rules bar it from offering to buy a stake of 30 per cent or more for the six months to follow.

RBS increased 1.2 per cent to 360.1 pence. The government- owned bank also plans to exit most of its US and Asian markets and may cut as much as a quarter of its 120,000 employees in the coming years, the Financial Times reported. RBS will announce a strategic review when it reports annual earnings next Thursday.

Aerospace group BAE Systems also rose 2.7 per cent to 411.3 pence, recovering slightly after an 8.3 per cent fall in the previous session when it warned that US defence cuts could hit this year’s earnings.

Expectations of new contract wins helped ARM Holdings push higher in afternoon trading. Shares in the British chip designer finished up 2.4 per cent at 970 pence, its highest since the end of January.

EUROPE
Valeo added 13 per cent to €99.07, its highest price since 1998, after saying earnings before interest, taxes and other expenses rose 16 per cent to €411 million in the second half of 2013. That beat the average of three analyst estimates.

Technip rose 2.5 per cent to €71.74, capping its largest two- day increase since May 2009. Societe Generale SA upgraded its rating on the stock to buy from neutral, saying Europe’s largest oilfield-services provider may begin to cut costs as it introduces tighter controls.

Kering slipped 2.3 per cent to €151.45. Sales at the Gucci brand, which made up about 37 per cent of total revenue in 2013, rose 0.2 per cent in the final three months of last year, according to a statement. That was the slowest quarterly growth in four years and trailed the 0.8 per cent increase projected by analysts. SGL Carbon dropped 4 per cent to €29.21 after saying operating earnings are likely to drop if the market doesn’t improve. The maker of graphite electrodes also said it won’t pay a dividend for 2013 after posting a loss of €400 million for the year.


US
US stocks edged higher with the S&P 500 within grasp of record levels, though investors found little reason to push shares solidly higher following a recent rally.

Priceline. com jumped 3.2 per cent as one of the S&P 500’s biggest gainers, rising to $1,324.08 a day after reporting results that beat expectations. Hewlett Packard also reported results that topped expectations, and the computer maker also raised its 2014 profit view, though shares dipped 1.3 per cent to $29.79. Groupon slumped 16 per cent to $8.62 a day after unexpectedly forecasting a quarterly loss. Pharmacy benefit manager Express Scripts Holding fell 3.9 per cent to $74.10. – (Additional reporting: Bloomberg, Reuters)