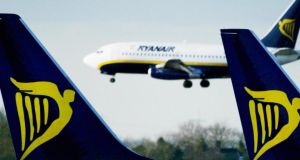 Shares in Ireland and across Europe were little changed yesterday following their drubbing earlier in the week, as banks rallied but telecommunication companies fell.

UK stocks also fell slightly, but US stocks bounced back underpinned by sturdy corporate results, as the market fought to regain its footing following its largest sell off in months on Monday. Monday’s sharp falls, on the back of unexpectedly weak US economic data and concerns over growth in China, opened the door yesterday for traders looking for bargains across the Atlantic.

DUBLIN
On a quiet day on the Iseq, Ryanair was one of the standout performers, climbing 1.07 per cent to close at €6.80 on heavy trading. The airline, in the middle of a major strategic change programme centred around its customer service, plans to chase the business market during the quieter winter months and will mothball less of its fleet than usual.

Glanbia rose 0.37 per cent as the food firm’s sector continues to be reshaped through mergers. Its US rival, Post Holdings, has agreed to buy Nestle’s Power Bar and Musashi brands for about $500 million.

CRH was by far the most heavily traded stock, closing up just over 0.5 per cent at €18.93, ahead of its results later this month. Data from the US Census Bureau showed spend on new roads is increasing. CRH derives 45 per cent of its US profits from new highways.

ARM lost 5.9 per cent to 875 pence. The company, whose products power Apple’s iPhone and iPad, said royalty revenue rose 7 per cent to $146.4 million, compared with a 13 percent gain in the third quarter and a 19 per cent increase a year earlier.

Associated British Foods, the owner of Penney’s discount clothing stores, added 2.8 per cent to 2,762 pence. Morgan Stanley raised its estimate for the shares to 3,570 pence from 2,410, saying investors undervalue its Penney’s/ Primark division. The retailer may have a market capitalisation of about £30 billion as a standalone unit, the bank estimated.

EUROPE
UBS added 5.4 per cent to 18.39 Swiss francs. The bank reported net income of 917 million francs (€750 million), double the average estimate of analysts. It recorded a 470 million franc tax gain in the quarter.

KPN declined 4.8 per cent to €2.57. The company said it would eliminate as much as 14 per cent of its workforce in the Netherlands over the next three years. Fourth-quarter earnings before interest, taxes, depreciation and amortisation fell 29 per cent to €581 million, disappointing analysts.

ThyssenKrupp declined 1.4 per cent to €18.90 after UBS cut its 12-month price estimate to €12 a share from €15, citing a capital increase in December and the company’s retention of a loss-making Brazilian steel unit. Shares of the German steelmaker gained 2.9 per cent last week and climbed to a two-month high on Monday.

NEW YORK
Shares of the retailer JC Penney slid 9.2 per cent to $5.16, reversing a steep gain in premarket trading. It reported a modest rise in quarterly sales but gave no details on its gross profit margin, leading analysts to conclude it had to resort to big discounts over Christmas.

Yum Brands rose 8.3 per cent to $71.67. The owner of the KFC and Taco Bell fast-food chains posted profit excluding some items of 86 cents a share in the final three months of 2013, beating analysts’ projections.