Coronavirus the data weighing most heavily on markets

Ryanair, AIB, Bank of Ireland and CRH among the big players to give up ground on Iseq 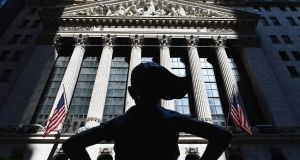 Growing concerns about the ability of markets to withstand the impact of coronavirus on real-world economies took its toll on Friday as markets eased again, with many across Europe touching lows not seen in recent months.

In Dublin, the Iseq, edged down another 0.66 per cent.

Good news for FBD Holdings and Providence Resources was not enough to boost an index in which almost all of the big players gave up ground.

Ryanair gave up 2.63 per cent on a day when it launched its legal effort to frustrate the Government’s travel guidance and quarantine arrangements.

Both the main lenders were weaker with AIB closing down 2.13 per cent and Bank of Ireland off 1.91 per cent amid general malaise in banks.

On the upside, Kerry added 2.56 per cent after announcing a higher interim dividend despite publishing quarterly figures that showed a 17.5 per cent fall in profits. And Hibernia Reit was 3.56 per cent stronger on the back of modestly upbeat results earlier in the week.

Explorer Providence finished over 10 per cent higher – albeit it is just a penny stock – after unveiling the slate of members in a consortium compiled by its new shareholder Spoton Energy to target delivery from the Barryroe prospect.

FBD was another to gain on the day after naming AIB deputy chief executive Tomás O’Midheach as its new chief executive, ending a month-long search for a successor to Fiona Muldoon. The shares closed over 4 per cent higher.

London’s FTSE 100 erased session gains to end at 10-week lows on Friday after Britain postponed the easing of a coronavirus-induced lockdown as cases surged, raising fears that a nascent economic recovery may reverse.

The FTSE 100 ended down 1.5 per cent after having gained as much as 1.7 per cent during the day when upbeat earnings from British American Tobacco and Glencore had lifted the index. But both stocks later gave up gains, down 5 per cent and 1.4 per cent respectively, as sentiment turned.

The blue-chips index fell 4.4 per cent in July, its first monthly fall since the coronavirus-driven crash in March, on fears that another round of shutdowns could cripple business activity.

Aer Lingus and British Airways-owner IAG tumbled 9 per cent as it said it would raise about €2.75 billion to strengthen its finances, while broadband and mobile operator BT Group dropped 8.6 per cent after it laid out a grim forecast for the year.

European stocks posted their first monthly decline since a market selloff in March on Friday as growing doubts over a global recovery from the coronavirus crisis overshadowed a batch of strong earnings from technology firms.

The Stoxx 600 was down about 1 per cent in July, with fears of a resurgence in coronavirus cases also weighing on the mood.

The top gainer on the Stoxx 600 was Finnish telecom network equipment maker Nokia, up 12.5 per cent after reporting an unexpected rise in underlying profit as it reduced low-margin business.

BNP Paribas rose 0.8 per cent as it earned a higher-than-expected quarterly profit, boosted by a surge in fixed income trading and strong demand for corporate finance.

US stocks fell amid a sell-off in giant oil producers and concern that a resurgence of coronavirus cases would curb an economic recovery. The dollar rose. Energy shares led declines in the S&P 500 as Exxon Mobil and Chevron had their worst quarterly losses in a generation.

Equities also dropped after Florida posted a fourth straight record jump in deaths by the virus and Arizona’s cases accelerated.

The Nasdaq 100 outperformed after solid results from Apple, Amazon, Facebook and Alphabet on Thursday.