China and US worries weigh on markets

Bad day on Iseq for companies with Chinese focus as FTSE drops 1.2% 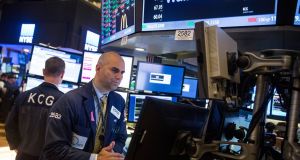 A trader works on the floor of the New York Stock Exchange on October 14th, 2015 in New York City. Photograph: Burton/Getty Images

US stocks were dragged lower as a bleaker outlook from Wal-Mart Stores Inc added to global growth concerns.

The Iseq slipped by a quarter of a percentage point, while the FTSE 100 in London dropped 1.2 per cent, as European shares ended lower for a third consecutive session on Wednesday.

Concerns about deflationary pressures in China, a major destination for continent’s exports such as cars and luxury goods, spooked investors.

The pan-European FTSEurofirst 300 index fell 0.8 per cent while the euro zone’s blue-chip Euro STOXX 50 index declined by 0.9 per cent. Some investors were taking profits after a rebound last week.

Irish stocks with global operations, particularly those with a focus on China, had a bad day on the Iseq.

Glanbia, the dairy company that sells a variety of dried milk products in the Chinese market, fell close to 3 per cent to close the session at €15.68. Smurfit Kappa Group fell almost 1.4 per cent, while CRH, the building materials company, fell almost 1.6 per cent.

The Ormonde Mining penny stock fell more than 11 per cent. The company gave investors an update on Wednesday about its Barruecopardo tungsten project in Spain.

Property company Green Reit rose by 2.3 per cent, despite opening the session in negative territory. Broker Merrion Capital released a detailed note on the property company that concluded “temporary weakness is an opportunity to acquire Ireland’s premium commercial landlord”.

Among the stocks hurt by exposure to China were Asia-focused bank Standard Chartered and luxury firm Burberry, down as much as 1.4 per cent. They fell after consumer inflation in China slowed more than expected in September.

Housebuilders also came under pressure as some investors took profits after a recent strong run, traders said. Shares in Taylor Wimpey, Persimmon and Barratt Developments fell 3.1 to 3.6 per cent.

British financial company Hargreaves Lansdown rose 3.7 per cent, the third-best performer on the pan-European STOXX 600 index. Even though Hargreaves reported a drop in first quarter assets under administration, investors were pleased that new business in-flows had hit a record high.

Sweden-based builder Skanska fell more than 8.9 per cent, its heaviest one-day drop since August 2011, after it said writedowns would hit its third quarter profits.

The news added to worries about the outlook for US earnings, with S&P 500 profits forecast to have dropped more than 4 per cent in the third quarter compared with a year ago, according to Thomson Reuters data.

Wal-Mart sank 10 per cent to $60.03 in its biggest one-day percentage decline in years and heaviest trading day since January 2009, after it forecast a drop of up to 12 per cent in earnings per share in fiscal 2017.