'Biggest bond bubble in history' is about to burst 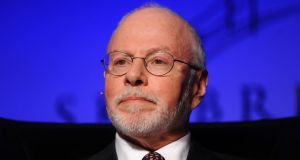 Paul Singer, founder and president of Elliott Management: “Hold such instruments at your own risk; danger of serious injury or death to your capital!”. Photographer: Jacob Kepler/Bloomberg

“The market can remain irrational longer than you can remain solvent,” is a famous quote, often attributed to JM Keynes. And indeed we have experience in Ireland of how a market – in our case the housing market – can remain irrational for a long period of time. The “ fundamentals” were supporting it, was the argument. And how wrong it was.

Now we have the same argument being used to support the super-low and even negative yields in bond markets, especially those for Government debt. Some $13,000 billion of bonds worldwide are now trading at negative interest rates, including short-term Irish Government debt. But with central banks pumping billions into the world economy (often by buying bonds), growth remaining at record lows and official interest rates on the floor, we are told, yet again, that the fundamentals are supporting all this.

He told investors in a letter this week that, in his view, the turnaround in the bond market was likely to be “surprising, sudden, intense, and large”. He said he believed we were in “the biggest bond bubble in world history”, and advised investors to avoid sub-zero yielding debt.

“Hold such instruments at your own risk; danger of serious injury or death to your capital!” he wrote, according to CNBC.

Of course such warnings have been made for the last couple of years and, despite them, bond prices have continued higher and yields – or interest rates – have continued to decline. It is hard to know what might burst the bubble, with little sign of a big take-off in growth or inflation. But common sense would suggest that investors paying governments to lend them money to cover their budget deficits really doesn’t make a lot of sense.

As Singer said, it could all end with a bang. But when, and why, is the really hard question to answer.