Bank of Ireland, PTSB and AIB rebound after ‘mauling’ over recent days 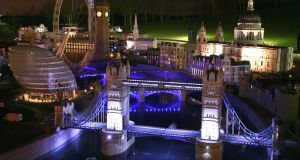 Miniland at Legoland Windsor. Merlin shares edged higher by 1.2p to 369.3p amid news that it would invest £265 million to open a Legoland theme park in New York as it presses ahead with global expansion plans.

Shares rose as the euro fell on the back of news that the European Central Bank would begin cutting its bond buying programme in January.

The banks advanced despite the ongoing scandal over the way lenders treated an estimated 21,000 consumers with tracker mortgages.

Bank of Ireland climbed 5.35 per cent to close at €6.62. The institution issued an interim management statement a day ahead of schedule in what was seen as a bid to take some of the heat out of the tracker dispute. Traders described the statement as “solid”.

“The financials have all rebounded following a mauling in recent days,” one Dublin trader said on Thursday.

Amongst the market’s heavyweight stocks, building materials giant CRH added 2.16 per cent to €32.17. In a linked industry, insulation specialist Kingspan advanced 1.95 per cent to €35.75.

Ryanair added 3.45 per cent to end the day at €15.91. Dealers suggested that its shares will recover as the company moves on from the recent controversy over its plans to cancel flights over the winter months.

Cider maker C&C was up 1.54 per cent at €2.975 after issuing results showing operating profit for the six months to the end of August were unchanged at €50.5 million. The figures were ahead of what some investors expected, traders said. Dalata Hotel Group gained 1.17 per cent to close at €5.352.

Barclays fell 14.6 pence to 182.4 pence despite reporting a rise in pretax profit from £837 million to £1.1 billion in the third quarter.

“It was the drop in trading revenue was caught investors’ attention, and income derived for dealing on the financial markets declined by 34 per cent

“The size of the decline spooked traders, as US banks posted on declines that were in the mid-teens percentage wise.” Barclays was the worst performer on the FTSE 100.

Merlin shares edged higher by 1.2p to 369.3p amid news that it would invest £265 million to open a Legoland theme park in New York as it presses ahead with global expansion plans.

The owner of Madame Tussauds and Alton Towers said that the new Legoland will open in 2020 and be located in Goshen, Orange County, 60 miles northwest of the Big Apple.

The euro’s tumble provided European stocks with their biggest gains in more than six weeks, as the ECB’s Mario Draghi said that the bank would extend asset purchases until at least September 2018 at a reduced price.

Shares in Spanish retailer Dia slumped 4.8 per cent to a five-year low after a profit warning but most of the country’s blue chips posted gains as hopes grew of a breakthrough in the Catalan crisis. Banco Sabadell and Banco Santander both rose 3.2 per cent.

Finnish group Nokia lost a spectacular 17.5 per cent on the back of poor quarterly results. Deutsche Bank shed 0.9 per cent.

DowDuPont was up 3 per cent after its third-quarter profit estimates came in well above Wall Street’s expectations ahead of the combined company’s first earnings report next week.

Bristol-Myers Squibb fell 3.8 per cent after its quarterly profit fell short of estimates due to higher costs and an inventory write-off. AbbVie dropped 1.8 percent after reporting deaths in psoriasis studies. Nike jumped 3.7 per cent, lifting the Dow the most, after the company said it expects earnings per share to grow in the mid teens over the next five years.