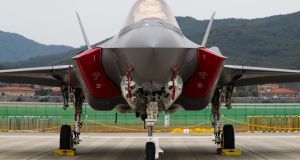 Lockheed Martin Corp dropped the most in nine months after its first hint at a 2018 outlook suggested that the company won’t reap rewards from a record $104 billion (€88.4 billion) order backlog just yet.

Sales will increase about 2 per cent next year as a new rule is adopted that changes the timing of when revenue is booked, the world’s largest defence company said in a statement Tuesday. That fell short of the 2.8 per cent average of analysts’ estimates compiled by Bloomberg.

The longer-term picture, which includes higher cash generation than the company had previously forecast over the next three years, had some analysts urging patience to jittery investors.

Quarterly earnings results that came in below expectations added to the sluggish near-term growth to disappoint investors, who had lofty expectations for a stock trading near historic highs. The shares declined 2.5 per cent to $312.60 in early afternoon trading in New York, after earlier dropping as much as 3.2 per cent, the biggest intraday decline since January 24th.

Shareholders are focused on sales growth and cash flow as barometers of the company’s ability to wring greater rewards from the F-35 fighter jet, the Pentagon’s most expensive weapons system, and other defence products, said Douglas Rothacker, an aerospace and defence analyst with Bloomberg Intelligence. Analysts expect Lockheed’s earnings per share to climb almost 50 per cent by 2020 as F-35 deliveries rise.

While the F-35 programme’s operating margin is poised to exceed 10 per cent next year, Lockheed will still need to counter dwindling profits from its F-16 fighter and C-5 cargo aircraft, Bruce Tanner, Lockheed’s chief financial officer said during a conference call with analysts. Recent contract wins such as an F-16 sale to Bahrain and missile defence sale to Saudi Arabia won’t be felt until the end of the decade.