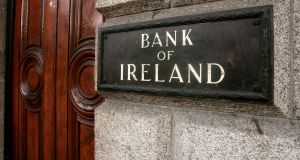 European stocks fell on Tuesday, with banks standing out as a weak spot, amid fresh fears over the timeline to a Covid-19 vaccine, uncertainties over a Brexit trade deal, and prospects of further stimulus from the European Central Bank (ECB), which would further squeeze market interest rates and lenders’ margins.

Appetite for shares was muted from the outset of trading on news that Johnson & Johnson had paused its Covid-19 vaccine candidate clinical trials due to an unexplained illness in a study participant.

Concerns over the prospect of a post-Brexit trade deal also weighed on traders ahead of a meeting between Boris Johnson and the head of the European Commission on Wednesday, on the eve of an EU summit that the UK prime minister has set as a deadline for reaching the outlines of an accord.

Banking stocks were out of sorts – with AIB down 4.1 per cent at 93.9c and Bank of Ireland off 4.5 per cent at €1.82 – as European government bond yields fell amid rising expectations that the ECB will add further stimulus to an economy hit by the coronavirus pandemic. Banks are currently being charged negative rates by the ECB for any surplus funds they place with the institution.

The UK’s domestically focused FTSE 250 stocks index, considered a barometer for Brexit sentiment, sank 1.5 per cent, while the blue-chip FTSE 100 slipped 0.5 per cent.

Figures on Tuesday showed the UK’s unemployment rate rose more than expected in the three months to August to its highest in more than three years, and new restrictions announced on Monday are likely to make that level worse, analysts said.

In company news, clothing retailer French Connection Group tumbled 19.6 per cent after posting a plunge in first-half sales due to the pandemic.

German investor sentiment fell more than expected in October on a triple whammy of coronavirus, Brexit and US election angst, serving to put stocks traded in Frankfurt under particular pressure.

In company news, Airbus fell 3.5 per cent as JPMorgan cut its rating on the plane-maker’s stock to the equivalent of a sell.

MorphoSys shares dropped 5.4 per cent as the German biopharmaceutical said it is selling a €325 million convertible bond.

The Dow Jones Industrial Average and the S&P 500 stock indices were lower in early afternoon trading as a result of Johnson & Johnson’s paused Covid-19 vaccine trial, although a rally in technology shares supported the Nasdaq.

Johnson & Johnson’s shares declined. Some of the worst-hit companies due to the pandemic, including cruise line operators Carnival, Norwegian Cruise Line and hotel operator Wynn Resorts, were also sold off.

Amazon. com shares, which have already surged 86 per cent this year, added to their gains as the company began 48 hours of promotions as part of “Prime Day” in an early start to the holiday shopping season.

Kicking off third-quarter earnings season, JPMorgan and Citigroup surpassed analyst estimates for quarterly profit on a surge in trading revenue.

However, Citi’s results underscored deeper troubles in its consumer bank that struggled with a decline in customers and spending, sending its shares down.

Boeing dropped as it lost another three orders for its grounded 737 Max jet in September and delivered half the number of aircraft from the same month a year earlier. - Additional reporting: Reuters