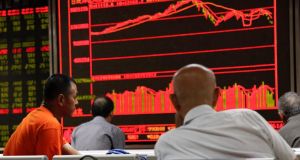 Chinese shares, the epicentre of recent financial market tremors, were solidly higher for most of the day, though they were off session highs in afternoon trade. (ROLEX DELA PENA/EPA)

Asian stocks rose on Thursday as a sharp rebound on Wall Street eased fears of a protracted global market rout, while the dollar steadied as risk appetite returned. Sentiment was also supported by comments from New York Fed President William Dudley on Wednesday who said the prospect of a September rate hike “seems less compelling” than it was only weeks ago given the threat posed to the US economy by recent market turmoil.

“Certainly Dudley’s comments show that US policymakers have serious concerns about events in China and the potential ripple out effects,” Michael Hewson, chief market analyst at CMC Markets in London, wrote in a note.

European shares were seen following Asia higher, with financial spreadbetters expecting Britain’s FTSE 100 to open up 1.9 to 2.1 per cent. Germany’s DAX was seen opening 2 to 2.8 per cent higher, while France’s CAC 40 was expected to climb 2.5 per cent. Markets around the world plunged earlier in the week as a slump in Shanghai shares fuelled worries over China’s economic health, but some calm returned after Beijing rolled out strong policy easing steps late on Tuesday. MSCI’s broadest index of Asia-Pacific shares outside Japan rose 1.8 percent, pulling away from a three-year low hit earlier in the week. Chinese shares, the epicentre of recent financial market tremors, were solidly higher for most of the day, though they were off session highs in afternoon trade. The CSI300 index added 0.7 per cent and the Shanghai Composite Index was slightly higher, after the indexes had plunged more than 20 per cent over the past week. Tokyo’s Nikkei ended up 1.1 per cent, adding to the previous day’s 3.2-per cent gain, after US stocks racked up their biggest one-day gain in four years. Ironically, US stocks rallied on Wednesday on expectations that the Fed would hold off from hiking interest rates next month due to mounting global uncertainties, including China - the very factors that prompted heavy selling in the previous sessions. Chinese shares had ended lower in the previous session as a double-barrelled blast of central bank stimulus failed to convince investors of Beijing’s ability to jolt the world’s second-biggest economy out of its slowdown.

In currencies, the dollar dipped briefly overnight after Dudley’s comments on the chances of a September rate hike. However, he warned about overreacting to “short-term” market moves, and left the door ajar to raising rates when the US central bank holds a policy meeting on Sept. 16-17.

The greenback subsequently rallied as ebbing risk aversion reduced demand for the yen and euro, which had been bought as safe haven plays during the recent equity selling. The dollar got an additional boost from upbeat US durable orders data, which backed the view that the Fed would remain on track to eventually raise interest rates as the US economy continues to recover.

Against the Japanese currency, the greenback fetched 119.92 yen, steady from US levels and recovering from a seven-month low of 116.15 plumbed on Monday The euro was up about 0.3 per cent at $1.1349 after losing 1.7 percent in the previous session. It scaled a seven-month peak of $1.1715 on Monday. The common currency was also hurt by comments from a senior European Central Bank official. Peter Praet said the risk of the ECB missing its inflation target has increased due to commodity price falls and weakness in some overseas economies.

Gold took back some lost ground after suffering its biggest fall in five weeks overnight as the dollar rebounded and US stocks rallied. Spot gold rose about 0.2 percent to $1,127 an ounce.