Navinder Sarao was arrested in April on a US extradition warrant 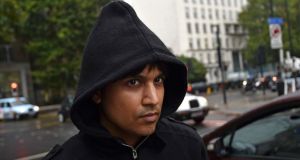 A London-based day-trader accused by the United States of market manipulation that contributed to the Wall Street “flash crash” in 2010, failed to persuade a court on Friday to postpone his extradition hearing.

Navinder Sarao, who lives with his parents in a small house near London’s Heathrow Airport, was arrested by British police on a US extradition warrant in April after being charged with wire fraud, commodities fraud and market manipulation by the Justice Department.

He was freed on bail on August 14th after spending four months in prison.

On Friday, his defence lawyer James Lewis told Westminster Magistrates Court he needed more time to obtain expert evidence about trading and how the market worked to help address the issue of whether Mr Sarao had made false representations through his trading activity.

But district judge Quentin Purdy rejected the application, saying he did not think expert evidence would be relevant to what he had to decide - which was not the facts of the case but rather whether the US charges would also be offences under English law.

Mr Sarao (36) is accused of using an automated programme to “spoof” markets by generating large sell orders that pushed down prices. He then cancelled those trades and bought the contracts at the lower prices, reaping a roughly $40 million profit on his trading, US authorities allege.

He has denied wrongdoing, telling the Westminster court in May: “I’ve not done anything wrong apart from being good at my job.”