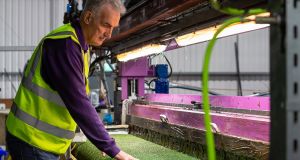 Irish pitch manufacturing business SIS Pitches has invested €2 million in a new turf production facility in the UK to support its growth plans as it targets €65 million turnover this year.

The company which supplied pitches to six stadiums for the Russia World Cup intends to add 15 employees to its Cumbria, UK, site by 2022 where it plans to increase production volumes to improve revenues from the €60 million recorded in 2018.

A new factory at the site covers an area of more than 2,100sq m and will be used to deliver long-lasting synthetic surfaces.

Speaking to The Irish Times, chief executive George Mullan noted the move increases capacity by about four times. SIS is gearing up to install its hybrid pitch at the Aviva stadium in the summer and has just finished work on one Olympic stadium in China.

Its biggest growth markets are anticipated to be the US and China, Mr Mullan said, where it expects to install up to eight pitches this year. In the UK, the company will install 14 pitches this year in addition to eight in France where its broken into the rugby market for clubs including La Rochelle.

As part of the investment, SIS has development premium products designed to maximise a surface’s durability.

Founded in 2001, the company employs more than 420 staff with offices in Ireland, the UK, Turkey, Russia, the Middle East and Angola.

The company’s pitches are licenses by Fifa and a preferred turf producer of World Rugby. It also manufactures GAA-approved surfaces.

Its artificial surface business in Ireland, established two years ago, has also grown strongly, according to Mr Mullan. He noted that it already has orders for €4 million this year.