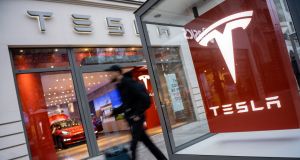 Elon Musk described the winding down of many stores as a cost-cutting move that enables Tesla to offer a long-promised $35,000 version of the Model 3. Photograph: Jens Schlueter/EPA

Tesla shares continued a steep sell-off in the wake of chief executive Elon Musk’s surprise move to close most of the electric-car maker’s stores and shift to online-only sales.

Many sales personnel first found out about the decision when Tesla published a public blog post Thursday afternoon, said three people familiar with the issue, who asked not to be identified discussing sensitive matters. A Barclays analyst cut his price target on the stock on Tuesday adding to a chorus of concerns raised by some investors also caught off guard.

Tesla declined to comment on the sales shift beyond Thursday’s blog post and an email Mr Musk sent employees later that day. Representatives didn’t immediately respond on Tuesday to inquiries about a Chinese media report that said Model 3 sedans are being held up by customs over labelling issues.

The stock has dropped as much as 16 per cent since Thursday, shaving more than $8 billion from Tesla’s market capitalisation.

The abrupt move by Mr Musk (47) shocked Alex Chalekian, the founder and chief executive of Lake Avenue Financial in Pasadena, California. The firm, which manages more than $150 million in client assets, sold all of the Tesla stock held for advisory clients on Friday.

“This was a total 180-degree turn,” Mr Chalekian, who owns a black Tesla Model S, said in a phone interview on Monday. “Tesla had been talking about expanding stores, and all of a sudden they are closing them. To me, this signals a huge financial concern and a possible cash-flow issue for Tesla.”

Until last week, Tesla’s store strategy seemed to be one of expansion. The company opened 27 new retail and service centres last quarter, resulting in 378 locations worldwide, according to its letter to shareholders. It was the most openings for a quarter since mid-2017.

Mr Musk described the winding down of many stores as a cost-cutting move that enables Tesla to offer a long-promised $35,000 version of the Model 3. – Bloomberg

Aer Lingus urged Government to oppose travel quarantine rules 11:55
Chris Johns: If this is to be the last lockdown it has to work 11:14
Fashion is in a slump, but there are saviours at hand 23 Jan
Fenergo on acquisition trail as revenue and headcount rises 23 Jan
EU shift on travel restrictions would be game changer for airlines such as Ryanair 23 Jan
Search executive
jobs on irishtimes.com