Tesla board seeks to rein in Elon Musk 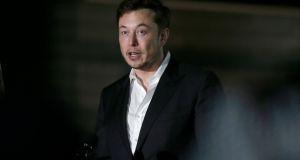 Some Tesla board members have told company founder Elon Musk in recent days to stop tweeting. To date, he has not heeded that advice. Photograph: Kiichiro Sato/AP Photo

Members of Tesla’s board are scrambling to control a chief executive who some directors think is out of control.

Elon Musk, the electric-car maker’s co-founder and chief executive, stirred up a public storm by announcing on Twitter last week that he wanted to turn Tesla into a private company. In recent days, according to people familiar with the matter, some of his fellow board members delivered a stern message: stop tweeting.

Mr Musk hasn’t heeded that advice. He has continued to post messages on Twitter, publicly plotting the company’s strategy and, in some cases, making assertions of dubious accuracy. That has only added to the chaos engulfing the struggling company.

Tesla’s board members are also racing to inoculate themselves from the possible fallout from Mr Musk’s public statements. While it is standard for boards to retain lawyers to counsel them on complicated matters, Tesla’s outside directors have hired two law firms to represent them.

The independent directors retained Paul, Weiss, Rifkind, Wharton & Garrison to help deal with a Securities and Exchange Commission (SEC) inquiry related to the posts, which is at an early stage but which directors expect could intensify into a full-blown investigation, one person said.

And three of those directors have separately hired the law firm Latham & Watkins to advise them as they consider any proposal by Mr Musk to take the company private.

Tesla declined to make Mr Musk available for an interview. The tumult is the latest blow to Tesla, which has been struggling financially and facing mounting questions from investors about the company’s ability to meet Mr Musk’s ambitious financial targets.

Some members of the board have grown alarmed by what they see as the CEO’s erratic behaviour, according to three people familiar with some directors’ thinking.

Directors were blindsided last week when Mr Musk claimed on Twitter that he had “funding secured” for a possible deal to convert Tesla from a publicly traded company into a private one. Such a transaction would most likely cost well over $10 billion.

Mr Musk said this week that he has been in talks with Saudi Arabia’s main government investment fund about possibly working on a deal to take Tesla private. But there were no indications that he has actually nailed down any commitments to bankroll such a transaction. The SEC last week contacted the company about Mr Musk’s Twitter posts, which drove up the company’s shares and prompted a halt in trading.

Even before the controversy over the going-private transaction, Tesla and its board of directors faced scrutiny because of multiple directors’ close ties to the company founder. One director is his brother, Kimbal. Others include Antonio Gracias and Steve Jurvetson, who are both directors of SpaceX, Mr Musk’s rocket company.

Mr Jurvetson has been on leave from Tesla’s board since late last year, after he resigned from his venture-capital firm amid allegations of misconduct. He has denied those allegations. Tesla said Mr Jurvetson has not participated in the board’s discussions on a possible buyout.

Another board member, Ira Ehrenpreis, is a SpaceX investor. Brad Buss had served as chief financial officer of SolarCity, the solar-panel maker run by Mr Musk’s cousin and where the Tesla chief previously served as chairman. Tesla acquired SolarCity in 2016.

Until last year, the only director without direct ties to Musk was Robyn Denholm, chief executive of an Australian telecommunications company. The board’s independence became an issue when Mr Musk announced the acquisition of SolarCity, which was struggling at the time.

Some institutional shareholders complained that the deal was not in Tesla’s best interest. Glass Lewis, a shareholder advisory service, called it a “thinly veiled bailout” of one of Mr Musk’s outside investments.

Tesla has also been plagued by operational problems and it has struggled to meet Mr Musk’s production targets for the Model 3 sedan, the company’s first mass-market offering and a vehicle he has said is crucial to company’s ability to become profitable.

“The issues facing Tesla relate to a lack of operational maturity,” said Roger McNamee, a Silver Lake founder who is now a managing director of the private-equity firm Elevation Partners. “The market has been remarkably patient as Tesla struggles to scale its manufacturing.”

That patience has been tested by Mr Musk in recent months. He has publicly disparaged financial analysts and insulted a cave diver who was helping rescue members of a Thai soccer team.

Board members’ frustrations have intensified in recent days. Directors were upset that Mr Musk’s tweets forced them to rush out a public statement explaining a transaction that was at an embryonic stage, according to people familiar with the thinking of board members.

Multiple directors have recently told Mr Musk that he should stop using Twitter, with one urging him to stick to building cars and launching rockets, according to people familiar with the board’s communications. Tesla employees, including the company’s public-relations staff, have echoed that point, another person said.

Mr Musk was back on Twitter this week, posting a message that he is “excited to work with Silver Lake and Goldman Sachs” as financial advisers on his proposal to privatize Tesla. But neither Goldman nor Silver Lake – a private-equity firm focused on technology investments – had actually signed on with Tesla or Mr Musk to play those roles, according to people familiar with the matter.

On Tuesday, Goldman was in talks with Tesla about a possible role, but had not finalised anything. Silver Lake, meanwhile, is interested in investing in any going-private deal, but it isn’t acting in a paid advisory capacity. – New York Times 2018