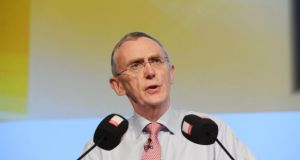 Paper and packaging manufacturing group Smurfit Kappa Group has reported third quarter earnings of €302 million and said it expects full-year earnings to be in line with expectations.

Group revenue increased by one per cent over the three-month period under review to €2.03 billion while pre-tax profit declined by 11 per cent to €93 million.

The company reported an ebitda margin of 14.9 per cent and free cash flow of €208 million.

“In spite of a somewhat weaker macroeconomic backdrop in the third quarter the group continued to see demand growth in Europe through the period, and delivered a strong performance in the region supported by pricing actions and continuing cost take-out initiatives. The implementation of both recycled and virgin containerboard price increases during the quarter is underpinning corrugated pricing,” said Smurfit chief executive Gary McCann.

In the first nine months of 2014 Smurfit Kappa delivered year-on-year earnings growth with ebitda of €866 million, an increase of 6 per cent, and pre-exceptional EPS of 115.2 cent, an up 55 per cent.

Corrugated volume growth of 2 per cent year-on-year to September 2014 was recorded.

Although operating conditions in France remain challenging, the group said volumes across the majority of the its core markets continue to show year-on-year improvement with good gains in the larger markets of Germany, the UK, Spain, Italy and Scandinavia. Volumes have remained steady in October, Smurfit added.

The group said it expected to deliver 2013 ebitda results in line with expectations.

“Following a period of debt paydown SKG is substantially better positioned today than at any other point in its recent history, with a well invested asset base and an optimal capital structure. The full year contribution of recently acquired businesses, a substantially reduced interest expense and the Group’s unrelenting focus on operating efficiency will deliver and drive value. Going forward, this presents a broad range of strategic and financial options, and the capacity to deliver an improved financial performance at all points of the industry cycle,” said Mr McCann.

1 In this strangest of recessions, what happens next for Ireland?
2 Bank of Ireland sees about 2,000 staff apply for voluntary redundancy
3 Michael O’Leary is the boss you want to lead an airline out of crisis
4 Estée Lauder staff at Dublin airport plan further strike action
5 Should I switch bank now with Ulster Bank at risk of closing?
6 Fortnite owner signs multimillion deal to buy Irish ‘kidtech’ firm
7 Best Covid-19 ‘influencers’ will avoid hectoring
8 Will brother’s widow get half of our parents’ estate when they die?
9 Ireland is in danger of losing the woods for the trees on emissions reduction
10 Minister seeks AG’s advice on banker accountability laws
Real news has value SUBSCRIBE