One51 cancels flotation and shareholders’ meeting 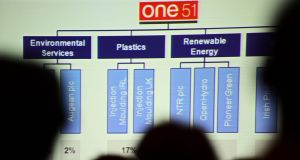 26/09/2012 FINANCE Shareholders listen to a presentation by Alan Walsh ,Chief Executive Officer, at the ONE51 agm in Dublin today (Wed). Photograph: Eric Luke / THE IRISH TIMES

Plastics manufacturer and waste manager One51 has postponed plans for a stock market launch following pressure from certain shareholders, understood to include businessman Dermot Desmond.

Last month the company signalled that it intended to float on the Dublin and and London stock exchanges and called an extraordinary general meeting (egm) for next Thursday to vote on a number of motions allowing for this.

However, One51 said on Friday that, following “consultations with certain shareholders”, it has decided not to go ahead with the EGM at this time.

“The company proposes to adjourn the EGM scheduled to be held on April 21st, 2016 indefinitely and without putting any of the resolutions to the meeting, to allow for further consultation with shareholders and consideration of alternative proposals, which include an initial public offering (IPO) or a listing at a future date,” it said in a statement.

Last month’s announcement indicated that shareholders supported the plan. One51 chairman Denis Cregan said at the time they believed that offering the company’s shares for sale on the stock market was the best way of getting value for their investment.

One51’s biggest shareholders are businessmen Dermot Desmond and Larry Goodman along with a number of co-ops, including Kerry, Dairygold and Lakelands.

Reports since the announcement suggested that Mr Desmond raised concerns at aspects of the proposed IPO, which could have diluted his interest in the company.

The issues included the transfer of up to 20 per cent in One51 to the minority shareholders in IPL, the Canadian plastics company in which the Irish group took a majority stake last year, should the flotation go ahead.

Mr Desmond’s International Investment and Underwriting (IIU) holds 20.8 per cent of the company. Last year it paid €36 million, or €1.85 a share buying out fellow shareholder Pageant Holdings’s 12 per cent stake in the group.

His move came at a time of heightened interest in the company as private equity fund, Capvest, has just told shareholders it was willing to pay €1.80 a share. However, since then the price of the shares on the “grey market” where the company’s equity is traded has fallen back to €1.65.

One51’s board did not give any indication of the price at which it wanted to float the company. That could only have been determined close to the actual date of an IPO.

None of the co-op shareholders commented on the postponement. The three biggest co-ops own almost 11 per cent between them. Sources said their members are likely to be disappointed that the IPO is not going ahead for the moment.

One source said their boards are likely to monitor the situation more closely following the news.

One51 makes wheelie bins and other plastic products, manages hazardous waste and holds a number of investments. Last year its operating profit before before once-off charges rose 14 per cent to €16.5 million. Its share of profits from investments almost trebled to €24.2 million.