McGann packs up at Smurfit

McGann said he had ‘mixed feelings’ about stepping down 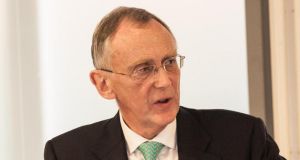 Gary McGann: “I won’t miss the 4.30am alarm call on a Monday morning.”

Farewell to Gary McGann, who is retiring this week as chief executive of Smurfit Kappa group.

McGann, a former chairman of the Dublin Airport Authority and a former director of Anglo Irish Bank, delivered his last set of results as a company executive on Wednesday, when he announced a 30 per cent boost to its interim dividend.

McGann said he had “mixed feelings” about stepping down, although he insisted he was exiting with the company in “rude health”.

“People remember you for what you’ve left behind, not what you’ve done,” he said. McGann is clearly hoping that his time on the board of Anglo - he was a director when the bank hit the buffers in 2008 - doesn’t overshadow the many other fine achievements of his 47-year executive career.

Tony Smurfit, scion of the family whose name hangs over the door, will take over at Smurfit Kappa from McGann, who will keep busy as the chairman of Paddy Power. He is barely two months into that role.

What is it like in the board room of Ireland’s most mischievous company?

“There are some very smart people in Paddy Power. I think I’m going to have to up my intellectual capacity,” he said.

And what will you miss from Smurfit?

“Lots of things. But I won’t miss the 4.30am alarm call on a Monday morning.”

Not too many people would, in fairness.