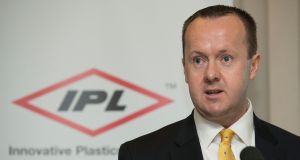 Dublin-based IPL Plastics, formerly known as One51, expects most of its 2,000-plus shareholders to decline a share buyback offer and remain on board as the company presses ahead with its long-awaited €125 million initial public offering (IPO) and flotation in Toronto next month.

Speaking to reporters on Thursday, chief executive Alan Walsh said that the company – which makes everything from yoghurt pots to refuse bins – will next Tuesday publish a price range at which the shares are expected to IPO. He said that the flotation is likely to take place in the second half of June.

Mr Walsh made the comments after shareholders voted at an extraordinary general meeting (egm) in favour of setting up a new Canadian holding company, IPL Plastics Incorporated (IPLP), to facilitate the flotation. The operating company will continue to be headquartered and run from the Republic.

While legacy shareholders – including Irish farmers, dairy co-ops and high-net-worth individuals – will not have stock exchange-tradable stock for six months after the IPO, the company is offering to buy back as much as 50 million Canadian dollars (€33.1 million) of shares in the meantime.

Mr Walsh said that he expects “minimal” take-up of this offer.

“The overarching feeling I’ve got from people is to get on with [the IPO],” he said. “No one’s in a rush to the exit door.”

He also confirmed that the company is looking at “a few” potential continental European acquisitions, which would help rebalance the geographical exposure of the currently North American-focused group.

The group’s earnings have been driven in recent years by its 2015 acquisition of a 67 per cent stake in North American company, IPL, with two Canadian firms left holding the remaining stake. Earlier this year, the Canadian firms – Caisse de Dupot et Placement du Quebec (CDPQ) and Fonds de Solidarité – swapped their interest in IPL for shares in the group in a deal worth almost €120 million.

However, margins were squeezed in the second half of 2017 as raw material resin prices spiked, US freight costs rose amid tougher rules on truck driving times, and the dollar weakened against the euro. The bank has subsequently changed its reporting currency since January to US dollars.

Most of the group’s legacy shareholders followed founding chief executive Philip Lynch when he set it up in 2005 as an investment company spun off from agri group IAWS (now Aryzta).

Mr Walsh has spent more than six years unravelling the group’s previous collection of disparate investments, including a major stake in ferries operator Irish Continental Group and Irish Pride Bakers, to turn it into a focused rigid plastics company.

“It’s been a bit of a roller-coaster ride, as you know,” Mr Walsh told investors at the egm.

1 Seán FitzPatrick makes fresh bid to secure planning for new Greystones home
2 Jervis shopping centre takes major tenants to court over rent disputes
3 Energia’s owner ‘plans to sell it later this year’ in deal worth €2bn
4 Dogpatch Labs and SOSV shortlisted to win NDRC contract
5 TikTok up against the clock as US ban leaves it at crucial juncture
6 Moving in and out of lockdown is a recipe for economic disaster
7 Aryzta’s pick for chairman faces opposition from investors
8 Digital pollution: ‘We have a pandemic of data and 90% of it is crap’
9 Shed Distillery in Leitrim to open €3m visitor centre next month
10 Microsoft returns to mobile market with Surface Duo
Real news has value SUBSCRIBE