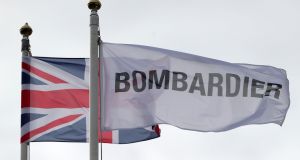 Bombardier’s Belfast plant received a welcome boost with news that American Airlines has placed an order for a number of CRJ900 jets, large parts of which are designed and manufactured in Ireland. Photograph: Niall Carson /PA Wire

Bombardier has won a firm order from American Airlines, valued at $719 million (€600 million), which is set to deliver a welcome boost for production lines at the group’s Belfast plant.

The US commercial airline has agreed to buy 15 new CRJ900 regional jets and has signed an option for a further 15 aircraft.

Bombardier’s Belfast facility designs and manufactures the complete centre fuselage for the CRJ900 and also the aircraft’s nacelles and wing components.

“This order is a testament to the tremendous value that the CRJ Series provides to airlines in the North American regional market. With its outstanding economics and new cabin design, the CRJ900 continues to offer unique revenue growth opportunities, while delivering the most modern regional jet cabin features in line with today’s trends and requirements,” Mr Cromer said.

American Airlines intends to take delivery of the first aircraft in the second quarter of 2019.

Bombardier also reported its first quarter results on Thursday, which showed that revenue jumped by 12 per cent to $4 billion (€3.3 billion), driven mainly by new business wins for its train division and new orders for business aircraft.

Alain Bellemare, Bombardier’s president and chief executive, said the group had “reached the halfway point” of its turnaround plan and had strengthened its balance sheet in the process.

Bombardier also highlighted that its C-Series “aircraft ramp-up continues to progress” and that it had made five deliveries during the first quarter.

Earlier this year, the United States International Trade Commission (ITC) dismissed proposals from the US commerce department to impose what Northern Ireland union leaders had feared would be “job crushing” new tariffs of almost 300 per cent on the sale of every Bombardier C-Series aircraft in the US.

According to Bombardier, nearly all of the required regulatory approvals have now been obtained for the new partnership that it will enter into with Airbus to produce the C-Series aircraft in the future.

“Completion of the transaction is currently expected before the end of the second quarter of 2018, ahead of originally planned,” the company said in a statement. “With the recent increase in Bombardier’s participation in the C-Series Aircraft Limited Partnership (CSALP) to 65 per cent, the corporation is expected to own approximately 33 per cent of the same entity following the closing of the transaction with Airbus.”