Half yearly sales up 1.8 per cent at Diageo 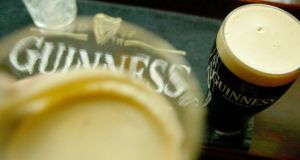 Drinks maker Diageo has reported a 1.8 per cent increase in sales for the six months to the end of December, due to strong demand in the US.

The group, which makes Guinness, saw sales rise by 4.6 per cent in the North American market. Sales in emerging markets, which includes China and Nigeria, rose 1.3 per cent.

However, sales in Western Europe declined 1 per cent during the six-month period under review.

Guinness net sales declined by 1 per cent globally, driven by weakness in Nigeria, the drink’s number one market by net sales in the last financial year, and Ireland.

There were however bright spots in other growing African markets such as in East Africa, where sales rose 23 per cent.

In Ireland, net sales of Guinness declined 6 per cent mainly due to the warm summer.

Irish spirits and liqueur brands performed well in the half due the group said. It attributed this to the continued momentum of Baileys in Greater China, where net sales rose by 37 per cent and Bushmills in Russia and Eastern Europe, where sales increased 22 per cent.

Globally Bushmills sales were up 13 per cent. Baileys, which increased global net sales by 1 per cent, continued to grow in Asia Pacific and in Latin America and the Caribbean.

In Ireland, excise duty was increased for the second year and was seen to contribute to the 16 per cent net sales decline of the spirits portfolio. However Diageo grew its volume share by 1.6ppts with increased share of Smirnoff Vodka and Gordon’s Gin by 2.9 per cent and 1.9 per cent respectively.

“We have continued to demonstrate the strength of our broad portfolio and diverse global business in a period which saw a more challenging emerging market environment,” said Ivan Menezes, chief executive of Diageo.

“Sustained performance in the US and improved performance in Western Europe enabled Diageo to absorb the current challenges in some of our emerging markets. We reacted quickly to the changing emerging market environment, reducing inventory levels in several key markets, which led to a weaker Q2, and tightly managing our cost base to deliver improved operating margins in line with our expectations,” he added.